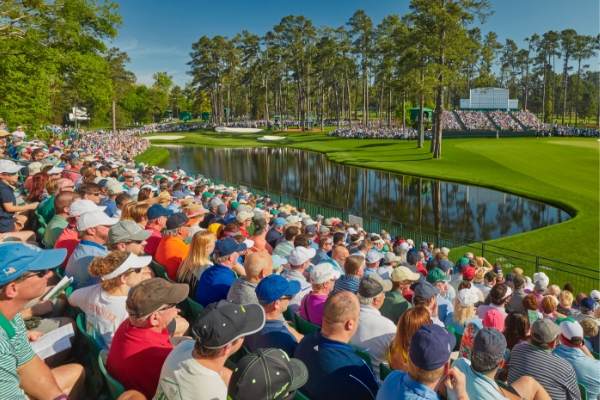 By George BlackwellApril 9, 2019No Comments

We’re back in Masters week and it feels so good; just two days until the world’s biggest golf tournament kicks off and golf fans are beyond excited for The Masters at Augusta National.

With so much media speculation on who will win and what will happen over the next few days, we thought we’d draw on some nostalgia to get us ready.

Everyone remembers their first Masters, some have even attended with Your Golf Travel but it seems the best Masters moments are somewhat agreed on.

However, with so many to choose from, some will have to miss out – here’s our Top 5 Masters Moments.

With a Brit yet to don a green jacket, Sandy Lyle was tied with Mark Calcavecchia on the 18th hole. His drive landed him in one of Augusta’s famous fairway bunkers, making for a nervous approach. Lyle flushed a seven iron from the sand, rolling it back from the ridge to give himself a birdie putt for the win. Take a look at how it unfolded below.

In his first Masters appearance as a professional, Tiger Woods blew the field away at Augusta National, putting in one of the all time great performances in a major championship. As the youngest ever major winner and breaking records left, right and centre, Woods ended up 12 shots better off than the rest. A truly iconic victory.

It’s that man again and probably the most famous shot in golfing history. On the 16th and looking like relinquishing his one shot lead over Chris DiMarco, Woods landed in the rough on the edge of the 16th green. Not many gave him a chance of getting it close, even the commentators, but he executed a masterful wedge shot which rolled precariously towards the hole, before giving Nike some of the best advertising you’re likely to see.

Bubba Watson is an extravagant golfer; from the pink driver to the incredible way he drives the ball, it’s entertaining to follow his round. In 2012, he found himself in front of the world’s eyes as he and Louis Oosthuizen found themselves in a play-off. A wayward drive saw Watson deep in the pine straw on the 10th hole, leaving a corridor of spectators seemingly narrowing his exit. The innovative Watson found a way to escape though with a simply incredible rope hook onto the green, a shot which effectively won him The Masters.

The long illusive first major for Sergio Garcia finally arrived in 2017 as he ended the weekend in the coveted green jacket after 74 attempts at major championship glory. On Masters Sunday, a thrilling day of action culminated in a sudden death play-off between European giants Sergio Garcia and Justin Rose, but Garcia prevailed with a birdie on the 18th….all on Seve’s 60th birthday as well.