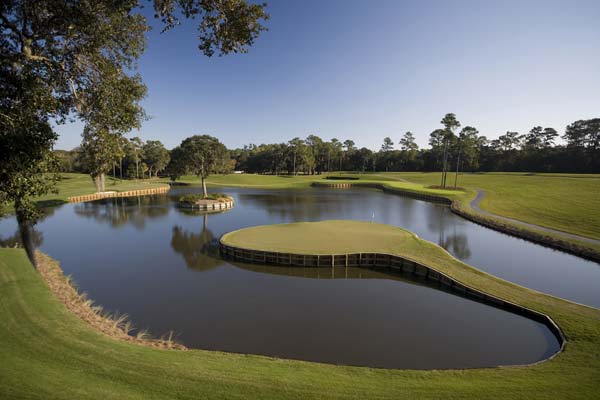 The Sawgrass Golf Resort welcomes the world’s best golfers each and every year for The Players Championship and while the likes of Tiger and co usually grab all of the golfing headlines, it’s the par 3 17th on the Stadium Course that is the real star of the show here. Arguably the most famous hole in the world, the island green 17th is probably atop many a golfer’s bucketlist. We thought we would take a quick look at some facts and figures about the world’s most famous par 3…

Pete Dye, who was inducted into the World Golf Hall of Fame for his ground-breaking golf course designs which include the likes of Casa de Campo, Harbour Town Golf Links and two of the five courses at the La Quinta Resort in California, also designed the famous TPC Sawgrass Stadium Course. However he can’t take all the credit as it was his wife, Alice, who also works as a designer, who suggested making the 17th into an island green. Unlike most husbands Mr Dye actually listened to what she was saying…well played Pete…well played! 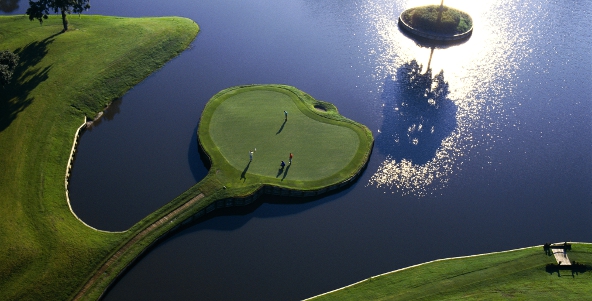 The 17th by numbers…

50,000 – The amount of earth, in cubic yards, that was removed from the site of the 17th to allow for the construction of the lake.

55 – The size in square feet of the bunker at the front of the green, making it the smallest of the 92 bunkers on the course. You’d think they could have been a bit more generous considering the penalty for missing the green anywhere else!

3,912 – The size of the green in square feet. The course’s average green size is 4,500 square feet which when compared to many courses in the UK is pretty big! Still…the water surrounding the green makes it seem pretty small from the tee!

121 – The yardage from the middle of the championship tee to the front of the green. Proof that modern golf course architects don’t need to build 250 yards monster par 3s to test the best players in the game. The 7th at Pebble Beach, 12th at Augusta and the 8th at Royal Troon are further evidence of this!

150,000 – The number of golf balls that find a watery grave at the 17th each and every year. This estimated number is based on an average of just over three balls per player during the course of the 45,000 rounds played on the Stadium Course per year. This number may be a little off as we are sure there are plenty of golfers with deep pockets who would happily fire a dozen brand spanking Pro V1s into the water “just for the experience”!

4 – The number of times per year divers enter the lake to retrieve the lost balls. Divers are hired to enter the water hazards on the course in January, April, July and October, taking two days to clear the lake of balls each time. The resort pays 7 cents per ball found and all of the balls are resold…and then promptly hit straight back into the water no doubt!

A side view of the 17th green highlights the severe contours which make two-putting a tricky proposition if you find the wrong level with your tee shot.

138 – The number of holes in one by amateurs and professionals from the course’s opening in 1980 through to March 2006. Surprisingly the 17th is by far the most aced hole on the course!

1 – The number of pars made from the 17th tee. In 1999 Freddie “Boom Boom” Couples dunked his first shot into the water only to reload and knock his second attempt into the hole on the fly for an outrageous par! (See the video below)

12 – The score posted by Bob Tway in the 2005 The Players Championship. With winds blowing between 25 and30 mph, Tway’s tee shot flew the green, as did his second shot. His third and fourth shots hit on the front of the green and spun back into the water. His fifth attempt found the green and then proceeded to three-putt. Tway went from four strokes off the lead to a distant 13 behind. Robert Gamez also hit four balls into the water but managed to hold his nerve and two-putt for an 11 in the 1990 Players Championship.

66 – The score posted by Angelo Spagnolo, a 31-year-old grocery store manager from Fayette City, Pennsylvania, on June 19, 1985. Spagnolo hit a total of 27 balls into the water…some from the tee and others from the drop zone. Rules officials finally urged him to putt his ball around the hazard, down the narrow walkway and onto the green. Spagnolo’s total score for 18 holes? 257! Don’t quit the day job Angelo!

And finally…a quick guide on how NOT to play the hole on your next Florida Golf Break, brought to you by Your Golf Travel Co-founder, Andrew Harding.

For information on Florida Golf Breaks and other American Golf Holidays please visit www.yourgolftravel.com or call free on 0800 043 6644.