US tycoon Donald Trump faces fresh protests against his plans to build a luxury golf resort on the Aberdeenshire coast but Trump continues to insist the construction will go ahead despite the opposition.

Trump’s $1.5 billion plans for the resort have created storms of controversy ever since they were first announced in 2008 and the project’s masterplan will be discussed later in the year by Aberdeenshire Council. The council have refused to rule out the use of compulsory purchase orders to remove residents who refuse to sell up to Trump from the land the tycoon wants, and one resident – Aberdeen fisherman Michel Forbes has refused an offer of almost £500,000 from Trump to buy his 23-acre farm which sits at the heart of the plans.

Forbes has been a staunch opponent of Trump’s plans throughout and now Forbes’ ramshackle farm is the linchpin in the battle between Trump and the protesters; but after rejecting Trumps’ offer, Forbes sold an acre of land in the centre of the planned development to the protest movement – Tripping Up Trump – and who have named the area ‘The Bunker’.

“We’ve called this piece of the land the bunker because he will now find it impossible to force a sale as there will be so many names on it,” group spokesman Martin Glegg said Wednesday. “This is the prime slot that Trump wants and there is no way he can get it now.”

Trump’s plans for the area include a five-star hotel, 1,200 homes and two international-standard golf courses. Colin Montgomerie, the European captain for this year’s Ryder Cup match is a supporter of Trump’s plans and the big Scot – along with actor Sir Sean Connery – are the two men Trump wants to play the opening round when the project is eventually complete. 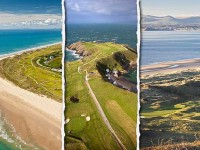