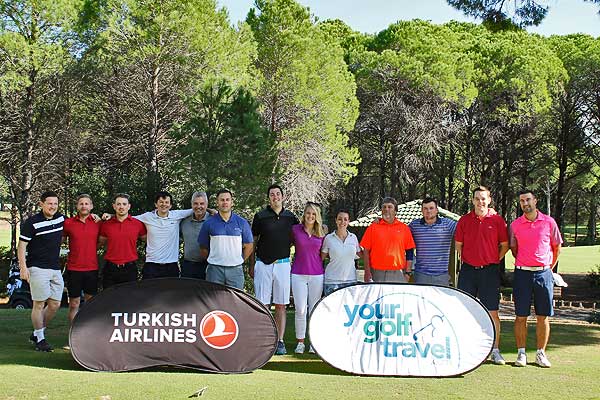 The top 16 Finalists consisting of 8 male pairs arrived in Turkey earlier this week to battle it out at the Cornelia Resort in Antalya for a place in the Turkish Airlines Pro-Am with the 2016 Ryder Cup Captain Darren Clarke.

The lucky golfers who successfully progressed through the Regional Finals have enjoyed a 7 day trip of a lifetime including 4 rounds of golf, plus 5* All Inclusive accommodation at the amazing Cornelia Diamond Resort, not to mention amazing goody bags from YGT partners Cleveland & Srixon, and plenty of other great prizes too!

Most importantly, the guys who have made it to the Final Series in Turkey have been playing it out for the chance to play in the Turkish Airlines 2015 Pro-Am with Your Golf Travel Ambassador and The 2016 Ryder Cup Captain Darren Clarke.

The Turkish Open Knockout tournament started back in May and has been played across 7 regions, with 36 pairs successfully making it to the Regional Finals. The South Regional Final took place at Hanbury Manor in Hertfordshire, while the North Regional Final was held at Aldwark Manor in York.

A belated congratulations to the 8 paris who survived regional qualifying and made the journey to Antalya!

How Turkey Shaped Up – The 8 Final Pairs

In tough and stormy conditions the quarter finals kicked off, and evently the bright sun came out in the afternoon. Here are the results from the Quarter Finals.

Tee time  – 8.10 – Can’t Chip Won’t Chip were also taken to the 16th in a tight match after they were victorious against The Bullet Piece with a 3&2 win.