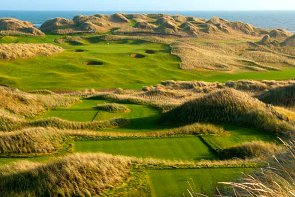 Golf, as we all know, is an ancient game played on ancient courses, many of which were sculpted by mother nature herself, and although those in the know regard many of the oldest courses in the world – think Tenby, Royal North Devon and, of course, the St Andrews Old Course – as the best, there have been a number of world class layouts that have joined the golfing party in the UK & Ireland over the last few years. Here we take a quick look at a few of the best courses to have been built in the last 5 years.

Donald Trump’s new offering to golfing world has not arrived without its fair share of controversy but for us golfers it looks to have been heaven sent; a true world links course which seems certain to be hosting world class golf events in the not too distant future. Arguments arose over the impact the course’s construction would have on the local natural topography and ecosystem and while there are two sides to that argument there is no questioning the quality of the layout penned by famed architect, Dr. Martin Hawtree, who was commissioned by Trump on the advice of Peter Dawson from the R&A.

Having walked the course we can confirm it is every bit as stunning as it looks in the pictures. When it has matured Trump International Golf Links will be right up there with the best in the world.

As you may have heard Trump has spared no expense at creating what he has described as “The Greatest Golf Course in the World”. Everything here is top spec: bent and fescue grass greens feature subtle but effective slopes and undulations, bunkers are revetted and punitive and the dunes that dominate this stretch of Aberdeen’s coastline are truly breathtaking and in some ways quite intimidating. Throw up to five different tee positions on every hole and not a buggy path in sight and you have potentially the most intriguing golf course to have been built in the last decade.

Mark Parsinen, the man who brought us the magical Kingsbarns, set out to create the Turnberry of the North and while that was a lofty ambition considering the Open Championship host’s reputation as one of the best in the world, Castle Stuart has made considerable waves since its opening in 2009.

Great banks of gorse seperate various parts of Castle Stuart which is a truly beautiful golf course. In fact during the practice rounds for this year’s Scottish Open Luke Donald spent much of his time taking photos of the surrounding vistas.

Located just a few minutes from Inverness, the astounding golf course sits, precariously at times, on the banks of the Moray Firth. Designers Mark Parsinen and Gil Hanse have capitalised on a majestic parcel of land to carve a golfing marvel; sitting on a raised beach some 40 metres above the level of the shores, the championship course provides some unforgettable panoramas and features everything that a classic links should. Fescue grasses, broom, heather and oceans of mature gorse bushes define the course and the arrival of the Scottish Open over the last two years has only served to highlight the quality of this outstanding course.

Endorsed by World Number One, Rory McIlroy, and viewed by many as one of Europe’s ‘must play’ golf courses, Lough Erne is set among the lakes of County Fermanagh, which is an almost unrivalled natural setting for a golf course of considerable quality.

Lough Erne is set in some truly stunning surroundings which have become synonymous with various parts of the Emerald Isle. Even if your game isn’t up to scratch you can’t fail to enjoy the walk at Lough Erne!

Nick Faldo’s creation takes the golfer on a journey to points of high elevation that offer stunning panoramic views of the surrounding lakes, to greens that sit on the very edge of the loch and the seclusion of the holes cut through the mature woodland that dominates the land. Faldo’s course is a majestic sight and a daunting test. Distinctive par-3s and the phenomenal par 5 16th are among the highlights of Lough Erne, which is undoubtedly a new star on the Northern Ireland golf scene.

The Twenty Ten Course at Celtic Manor may well be the most famous of the new courses on this list thanks to its association with the 2010 Ryder Cup. This is the only course in the world to have been purpose built for the Ryder Cup and the, some would say American layout serves up a feast of do or die golf from start to finish.

The par 4 12th on the Twenty Ten is just one of the holes that has water lurking from the tee right the way up to the green. Precision really is key around this endlessly fun golf course.

The course, which lies at the bottom of the valley atop of which the amazing Celtic Manor hotel sits, features numerous enormous water hazards and strategic dilemmas which will tempt the brave and force the conservative to be just that. The ride down to the Twenty Ten gets the excitement going as you descend into the valley and with its own private clubhouse, Ryder Cup inspired locker rooms and individual bag tags waiting in store for every player, a day on this course is a really special experience.

The St Andrews Castle Course arrived in 2008 in a blaze of gorse-clad glory and was a big hit with locals and visiting golfers alike. Designed by Scotsman David McLay Kidd – of Bandon Dunes fame – The Castle Course was the first new course commissioned by the Links Trust at the Home of Golf in over a century.

The Castle Course is set along some truly spectacular coastline and from various points on the course the Auld Grey Toon looms large on the horizon.

Sweeping undulations, devilish bunkers bordered by whispy rough, enormous putting surfaces and amazing views of St Andrews itself are prevalent throughout the course which has merely strengthened the reputation of St Andrews, adding another string to the already impressive bow of the world’s most famous golfing destination. Highlights include the 9th and 18th, whose greens share the land of the Kinkell Ness promontory.

The spectacular 600-acre estate at Killeen Castle is home to a Jack Nicklaus Signature Golf Course, Europe’s only Dave Pelz Scoring Game School and testament to the quality of the Golden Bear’s design is the fact that within three years of being built it was hosting the Solheim Cup.

Killeen Castle is a very atmospheric place to play golf. Here you will totally tucked away from the rest of the world.

The course can be played from anything from 6,118 yards to 7,677 yards, making it accessible to a great variety of golfers. The course rambles over 350 acres of beautiful natural woodlands and as with many a Nicklaus course players will have acres of space to aim at from the tee with the margin for error becoming smaller and smaller the closer you get to the greens. Situated just short drive from Dublin city centre, Killeen Castle offers golfers visiting the Emerald Isle the best of both worlds; the tranquillity of the Irish countryside and the almighty craic on offer in one of the world’s great cities.

Old Tom Morris recognised the potential for great courses in this corner of Western Scotland 130 years ago and a couple of years back another Scot, David McLay Kidd, built another stunning, natural links just down the road from Old Tom’s classic.

Machrihanish Dunes is one of the most natural golf courses in the world. A real throw back to the courses of yesteryear.

Kidd said that natural terrain produced 23 ‘natural holes’, meaning that minimal work was required in constructing the course, and the designer needed only to choose his favourite 18. Measuring 7,300 yards, Machrihanish Dunes features no less than six greens and five tees that are right on the water’s edge, making this one of the most spectacular new golfing experiences in the world.

Darren Clarke’s first design project has received many plaudits since it opened a few years back. The sand-based inland links layout is mature beyond its years, and the greens are worthy of a Tour stop. Perfect then for a golf break to Ireland. Designed to appeal to weekend warriors and professionals alike; the course features numerous tee positions and a number of different challenges that keep the golfer guessing from start to finish.

Moyvalley has distinct links accents and also boasts many features shared by the great stadium courses of the USA.

Large greens, countless water hazards and well placed bunkers are the main features of this par 72 course which requires a studied, accurate approach rather than a mindless grip and rip it style of play.

Practice facilities include a first-rate driving range with both outdoor and covered driving bays and a short game academy which includes 2 large chipping greens, 3 large bunkers and a large practice putting green, all of which are built to USGA specifications.

From we can see here, no matter how travelled a golfer you are, there are sure to be one or two courses that have cropped up in England, Scotland, Ireland or Wales in the last few years that you have yet to try your hand at.