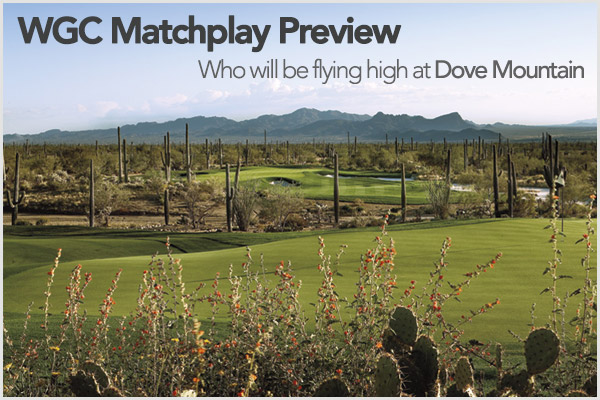 The top 64 available golfers in the world have assembled at Dove Mountain this week for the first World Golf Championship event of 2014 – the Accenture Match Play Championship. We run the rule over the key match-ups and likely faces to feature at the business end of the week.

THE LOWDOWN: The only match-play event on the regular PGA Tour schedule, the tournament is contested on the signature Jack Nicklaus course at Dove Mountain.  It features all the characteristics you’d expect from one of the Golden Bear’s designs, including wide fairways and plenty of visually intimidating bunkers. While the course is one of the longest on Tour, past winners have not been particularly long off the tee. Instead, the main challenge will be finding greens in regulation and navigating around the large, undulating and often fast rolling greens.

The field is split into four brackets (Sam Snead, Ben Hogan, Gary Player and Bobby Jones) and seeded according to their Official World Golf Ranking. With no Tiger Woods or Adam Scott in the field, Henrik Stenson (World No.3) is the top seed this week and will face 64th seed Kiradech Aphibarnrat. The top seeds in each of the other brackets are Justin Rose, Zach Johnson and Rory McIlroy.

JONES: Despite having to face the talented Thorbjorn Olesen first up, few appear to have a better draw on paper than Jason Day (21/1 with Paddy Power). Considering last year Day beat Zach Johnson, McDowell, Bubba and Poulter en route to a third place finish; you’d imagine he’d view this year’s bracket with great optimism. The Aussie comes into this fresh having missed the cut at Pebble Beach, but prior to that finished in a tie for second at The Farmers – only his first start for the year.

HOGAN: Sure, he’s been knocked off early by far lesser opponents in the past at this event, but Rory McIlroy (13/1 with Bet365) looks reasonably placed to emulate his 2012 run which took him all the way to the final. The Northern Irishman appears to be steadily regaining his confidence with the new clubs, registering top 10 finishes at his two starts this year. He meets Boo Weekly in the opening round before a potential match with Westwood/English. Should he survive both and manage to find some rhythm on the tricky greens, McIlroy could go deep into the weekend.

Check out the top 10 showdowns in the history of the WGC Match Play Championship, featuring great comebacks, clutch hole outs and stunning upsets.

PLAYER: This side of the draw looks a little trickier, with Ryder Cup stars Justin Rose, Luke Donald and Matt Kuchar all amongst the mix. Although lesser fancied, Ryan Moore (51/1) is capable of repeating his 2012 run that took him to the quarter finals before losing to Donald. In seven starts this season, Moore has finished in the top 10 in four of them, including a win at last year’s CIMB Classic. He’ll be vying for a Ryder Cup start later this year and can enhance his credentials with a strong showing this week.

SNEAD: It’s been dubbed this year’s ‘group of death’ and features a stellar cast with names like Johnson (both Zach and Dustin), Mahan, McDowell, Watson and Bradley, not to mention potential smokies like Matsuyama and Kaymer. Watson comes into this fresh off victory at the weekend’s Northern Trust Open, Mahan boasts an 11-1 record at this event in the past two years – but i’ll side with DJ (21/1 with Bet365), who comes here off the back of two runner-up finishes at Pebble Beach and Riviera. I was particularly impressed with his striking from tee-to-green at Riviera, and if emulated in Arizona, Johnson should be a handful for all opponents this week.