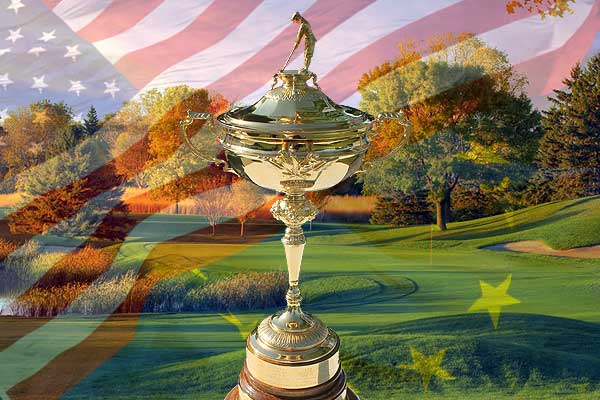 So Davis Love III was announced as the American Ryder Cup Captain for 2016 yesterday, and the decision came as somewhat of a surprise to many.

After all; Love is a losing Ryder Cup Captain, having been at the helm in Chicago in 2012.

Surely the likes of Paul Azinger, America’s last winning Captain, or Freddie Couples, who’s enjoyed plenty of success as skipper of Team USA at the Presidents Cup, would have been more suited to the task of finally getting one over the European juggernaut?

Not according to the USA’s Ryder Cup Task Force anyway. And perhaps they’re right.

After all, when you consider what actually went down last time out in the USA, I suppose it’s hardly fair to label Love as a “losing captain”.

The Miracle at Medinah was exactly that; a miracle; a crazy day of golf; one of the finest and most unlikely sporting spectacles the world has ever seen, and surely something a losing Ryder Cup Captain can’t be held accountable for!

Maybe that’s exactly why Davis Love III deserves another crack at the whip?

Consider this…golf is far from a certain game and if ANY of the following things hadn’t happened at Medinah, Europe’s comeback would have fallen slightly short, and Love would be a winning Ryder Cup Captain.

Steve Stricker misses short birdie putt for a half just before the Poulter Show:

We’ll come to Ian Poulter in a minute. But before that we must remember that should Steve Stricker, one of the best putters in golf, have holed a very makeable birdie putt on the final green against Luke Donald and Sergio Garcia, another half point would have gone the way of the Americans.

He missed though; and then this happened…

Ian Poulter already had a cracking Ryder Cup record heading into the 2012 matches. What he did late on Saturday in his and Rory McIlroy’s fourball match against Jason Dufner and Zach Johnson would elevate him to legend status.

Even the best players don’t birdie five holes on the trot all that often. The fact that Poulter did it in the pressure cooker atmosphere of the Ryder Cup, when all looked lost for Team Europe, makes his birdie blitz all the more impressive.

Ian Poulter relives the last of his five closing birdies on the Saturday of the 2012 Ryder Cup.

America had led 10-4; surely an insurmountable lead? Stricker’s miss and Poulter’s heroics though brought it back to 10-6, put the pressure on the Americans heading into Singles Sunday, and gave the European’s some much needed hope.

Rory McIlroy gets a police escort to Medinah:

If Poulter’s heroics laid the foundation for Europe’s attempt to equal the biggest ever last-day comeback in Ryder Cup history (the USA had previously come back from 10-6 down at Brookline in 1999), Rory McIlroy’s time keeping almost banjaxed the whole thing before it had even started!

McIlroy had read the tee times for Sunday’s singles matches on his phone and saw that he and Bradley were set to get it on at 12:25pm. One problem though…that was Eastern Time…and Medinah sits within America’s Central Time Zone. Whoops!

“I’ve never been so worried driving to the golf course before,” said McIlroy when questioned after his win against Bradley. “Luckily there was a state trooper who gave me the escort to here. If it wasn’t for him, I wouldn’t have got here in time.”

Imagine the guilt he would have felt had Rory missed his tee time and scuppered any European chances of a comeback!

The penalty for arriving late for your tee time in matchplay? Well…as long as you’re there, ready to go within FIVE minutes of your actual tee time, you lose the 1st hole.

Thanks to a large slice of luck, and of course the Illinois State Police, McIlroy avoided any such penalty. He went on to beat Bradley 2 & 1 so a loss of hole at the 1st could well have changed the outlook of his match and ultimately the contest as a whole.

>> Insert witty quote about the luck of the Irish here <<

Rose comes through in the clutch:

Europe had already won the 1st 4 matches on Singles Sunday to put ever increasing amounts of pressure on the American’s. Justin Rose would make it five from five by beating Phil Mickelson in seriously dramatic fashion.

Mickelson arrived at the 17th 1 up in the match and having hit his tee shot long of the green he watched as his brilliant chip shot, which would have won him the match had it dropped, brush agonisingly past the edge of the hole.

Phil Mickelson’s narrowly missed chip followed by Jutin’s monster putt is the perfect example of the thrills and spills of matchplay.

The pressure was firmly on Rose, who was arguably in three-putt territory, but the Englishman drained his 45 footer for birdie to take Mickelson, who to his credit showed great sportsmanship by applauding Rose’s effort, up the last.

Another birdie up the last would be enough for Rose to snatch victory from the jaws of defeat and with it another point for Team Europe.

Jim Furyk was 1 up against Sergio Garcia and like Phil Mickelson before him, he’d end up walking off the 18th with a loss against his name.

Unlike the Mickelson vs. Rose match though, Sergio didn’t require any moments of magic to beat Furyk, who bogied both of his closing holes to hand a point to the Europeans and edge them ahead (13-12) in the match for the 1st time.

Stricker bogies 17 and misses makeable putt on 18 to set the stage for Martin Kaymer:

Like Jim Furyk, Steve Stricker seemed to crumble when he came to the business end of his singles match against Martin Kaymer. The usually steady American would bogey the par 3 17th and then fluff his lines on the last to leave Kaymer with two putts to seal an epic comeback.

The German though would rush his first putt well past the hole, leaving a putt of at least 8 feet for the win.

Now…Kaymer had struggled hugely throughout 2012 and even at the Ryder Cup too. He didn’t contribute a single birdie in his Friday fourballs match alongside Justin Rose and wasn’t even given the chance to play on Saturday.

An eight footer then, to retain golf’s greatest prize, wasn’t exactly a straight forward task. But Kaymer maintained his composure when all around were gasping for air amid the chaos and almost unbearable tension, rolling in the putt to seal the Miracle at Medinah.

Taking all this into consideration, it’s abundantly clear that pinning any of the blame for the American’s loss in 2012 on Davis Love III is absurd. In fact, Love masterminding his team into an enviable 10-6 lead heading into Singles Sunday means he actually did a bloody good job last time out and if it wasn’t for a couple of missed putts here, a few European heroics there, and of course the Illinois State Police, he would have wrestled the Ryder Cup from European hands.

We at Your Golf Travel think Love deserves another crack at the whip and wish him good luck at Hazeltine…because if Europes haul of 7 wins from the last 9 matches is anything to go by, he’s gonna need it!