You’ve previously mentioned to us the Tour Schedule is exciting, if not a bit cluttered. With yet another major upon us, how are you feeling?

Knackered! But in the best way possible. They come so thick and fast now and when you’re in the moment, its a fantastic spectacle. It feels like we’re only just getting over the Masters and the PGA Championship, so with the US Open starting, it’s a great time to be a golf fan.

The story is also still going strong, with the players delivering a superb narrative. We started the season with Woods stopping the world turning at Augusta, then Brooks bossing Bethpage whilst Tiger couldn’t deliver. This week, with Tiger’s history at Pebble Beach, famously winning the US Open by 15 shots in 2000, great things could happen again.

Of course, the other side of that is the smaller tournaments which are feeling the squeeze. I had the pleasure of speaking to Jack Nicklaus when I was covering the PGA Championship and he felt that the Wells Fargo Championship at Quail Hollow felt the pinch. Many of the Major contenders, Tiger being a prime example, simply couldn’t fit it in their schedules.

The US Open this week is at Pebble Beach. Just what is it that makes Pebble Beach so special?

Well the US Open is special in its own right. It’s a unique, difficult tournament, with a lot of history. Pebble Beach being such a magnificent course just adds to that.

The course this year is just over 7,000 yards and about 300 yards short of a usual Championship setup, but the elements are so pinched and the rough is so thick that players will be punished for any inaccuracy. Controlling into the greens, which will get harder and harder as the week develops, will also be a tough ask.

However, like any tournament, hit the fairways and you will shoot a good number but you must be able to place that shot. Every player will be asking themselves the question, ‘how hard do I push?’ If they dare to take the driver out, it’s got to be straight.

How does Pebble Beach rank against the likes of Augusta or St Andrews? A lot of the Your Golf Travel team see it as the ultimate bucket list course.

The holes along the water are incredible; four through 11 are simply heaven on earth. Like Augusta, it’s so easy to lose concentration get lost in your own thoughts along the rugged Pacific Ocean. It’s another really interesting balance between beauty and brutality.

There is also a similarity between St Andrews and Pebble Beach. The vibe of the place is similar because it's a golf town full of like-minded people. It opened in 1919, so there is history from an American standpoint and it captures the love and the heart of golfers everywhere. It’s a public course so it also gives the casual golfer the chance to follow in the footsteps of Jack Nicklaus or Tiger Woods and that’s why people travel from all over the world to play it.

Our Chief Holiday Offer, Lee Westwood, couldn’t pick a favourite hole when we asked him. Do you have a favourite?

Seven captures the headlines, but I’m torn between five and eight. The 2nd shot of the 8th hole is the most beautiful shot in golf. It’s a blind tee shot and you can’t hit a driver because it’s a tiny little target, leading right up to the cliff edge. You’re then faced with about 160 yards of thin air before the green.

As the famous Jack Nicklaus quote goes, ‘If I had only one more round to play, I would choose to play it at Pebble Beach’. He actually redesigned the 5th in 1998 to make it a really hard, typical US Open par-3. It’s not long, but the way the water cuts in at a tiny, downhill target, it’s a proper risk and reward hole. When the winds up, you’ll see people hit it into the ocean.

The PGA last month was at the notorious Bethpage. After coming under fire for setting the course up to be extremely difficult in 2018, do you think it will be similar this year?

Make no mistake, it will be tough. The rough will be really thick, the greens will be really firm and the natural coastline will take care of the rest.

The USGA has a tough job and I think they do it very well. For each tournament, but particularly for those under the spotlight like the US Open, they need to find the line between success and failure and set the course up to that standard.

The US Open has flourished in recent years and managed to set itself aside from other Majors as a gruesome and gruelling tournament. That’s the US Open’s brand, it’s not about shooting 63 on day 3 and 4.

I think players also come to expect this now and they’re mostly on a level playing field. Although, the test can’t be adjusted once it’s set up, the weather will play a factor. The players in the morning will get a different kind of test to those in the afternoon. If it’s calm, you might see low scores, but it’s unlikely, there is a new course setup man for the USGA this year in John Bodenhamer and after the Controversy of the past couple of us opens, it seems like they may just err on the side of caution with setup so maybe don’t expect it to be quite as brutal as we have seen in the past although it will still be very challenging. 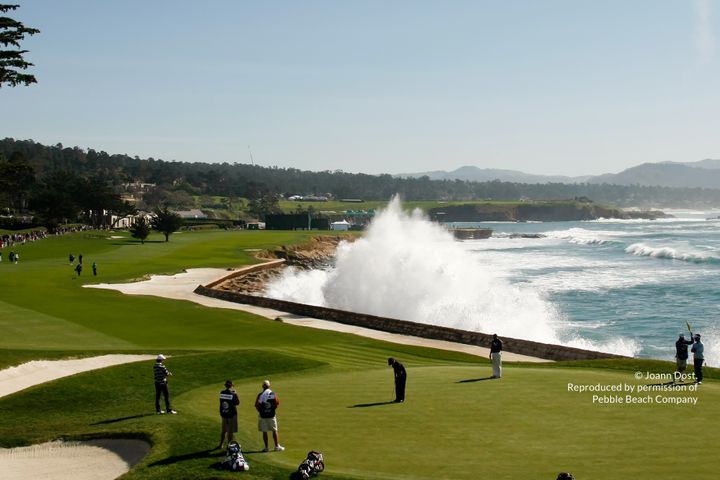 What is your highest score on one hole at Pebble Beach?

Eight in a Pro-Am. I was lapping it all up on the 18th tee and it kicked the living daylights out of me. That’s a great dogleg par-5, with the wind pushing you towards the ocean. Players line up expecting to make a four and often don’t.

How would the average golfer fare on Pebble Beach, assuming they can get over the breathtaking scenery and concentrate on the game.

On a normal week’s setup, it’s more than possible to navigate around the course, as long as the ball is kept dry. On a US Open setup, a 12 handicapper won’t break 100, because they’ll might need three or four shots around the green. It’s the difference between playing golf on Earth and the Moon.

I’ve mentioned the tiny greens, it is hard to hit lots of greens but it’s a fair test that rewards good play. On these courses, it’s important for average golfers to play the tees that give them the chance to play the hole as it was meant to be played and experience shots like the approach on the 8th.

Why would you recommend a golf holiday to Pebble Beach?

It’s one of the most beautiful courses and towns in the US. Last time I visited, I stayed at The Inn at Spanish Bay, which was stunning. What was really memorable was the amount of space I had when I was there, be it in the room, in the restaurants or in the grounds.

There is also a piper that goes out in the evening, which adds to the quaint history they’re trying to buy into. It has the vibe of the UK or Irish Links courses but with better weather.

Spyglass Hill, which is nearby, is also a course I almost like more than Pebble Beach. Del Monte is a beautiful, more user-friendly course and makes the holiday more accessible for the high handicapper.

Off the course, there is Big Sur, which is ideal for hiking and there is 17 Mile Drive which takes you around the rugged peninsula. You really are spoilt for choice.

What sort of golfer does the course favour and why? Who is your tip to win?

Tiger Woods has history here and there is absolutely no need for a driver, which favours Tiger’s impeccable iron play at the moment.

However, I’m going for Dustin Johnson. He was 2nd at The Masters, 2nd at the PGA Championship, he’s won the US Open before and has won twice at the Pebble Beach Pro-Am.

Even discounting previous performance, his stats say everything at the moment, he’s 3rd in strokes gained off the tee, 4th tee to green, 16th on approach and 14th putting. He is a man in form.

We understand that everything feels a little unpredictable at the moment, so our Flexibility Guarantee means that when you book a trip with us between 15th March and 30th April 2020, if you need to move your trip we won't charge you a fee to change the dates. We can also provide you with a travel credit towards your next booking instead if you prefer.