Spieth surges into lead on Thursday 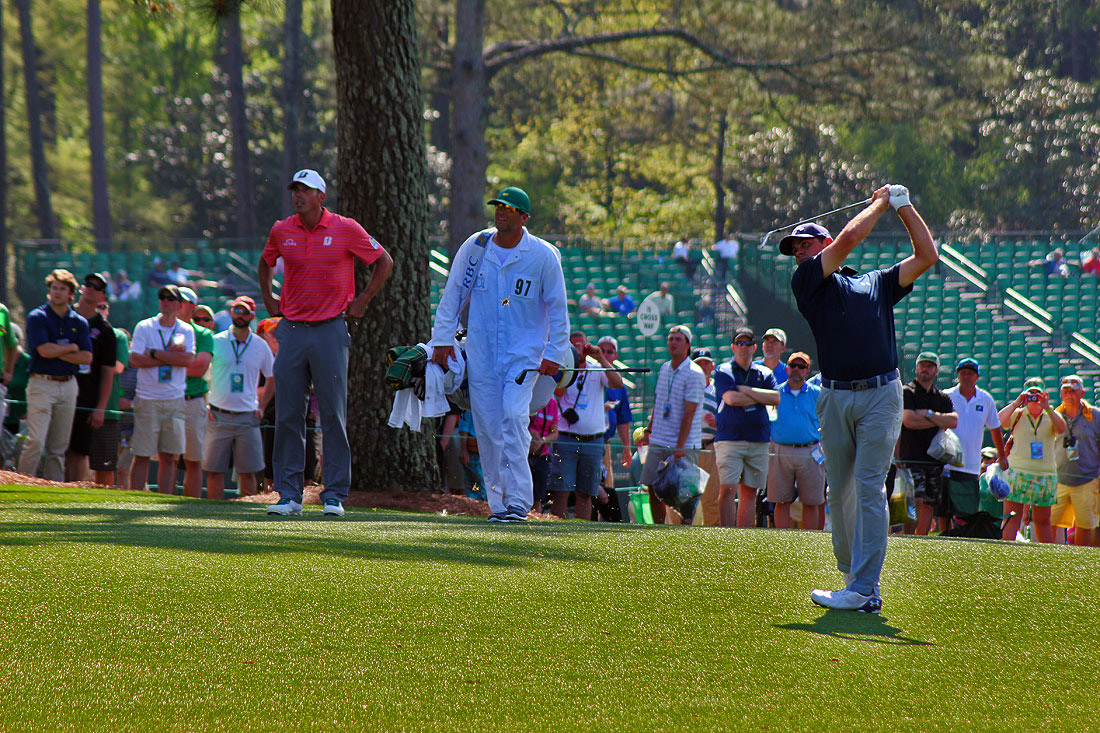 The golf should’ve written itself really. Rory and Tiger were going to open with 66 shots each to set up a tournament we’d remember for many years. Well, that didn’t happen. Instead Thursday at The Masters was owned by Jordan Spieth, the talented Texan set a mark of 64 which sees him 3 ahead of a 4-strong pack at 5 under par.

Through 14 holes it looked like Spieth could challenge any number of major and Masters records. Playing the 15th hole, a reachable par-5 where we’d seen many birdies at during the course of the day, Spieth’s train came to a stuttering halt with a sloppy bogey. His nerves looked like they’d taken another hit as he holed a 6 foot par on 16. These two moments were needed for Spieth to shake himself back onto an even keel. He’ll face many challenges of character over the next few days but for me, he looks imperious and I think he’ll follow his 64 with another sub-70 round today to take himself away from the field. His closing birdie on 18 was testament to his coolness under pressure, the testing drive was executed with aplomb, his towering fade off Sandy Lyle’s Bunker, set up an approach to the back left pin position which he played just to the right leaving a winding putt from pin high. Needless to say he holed it and the Patrons cheered, for me at least, I think we’ll see them cheering for him on Sunday as well, I can’t see him being beaten now.

PLAYER OF THE DAY

It had looked for most of the day that -5 would be the club house lead with our morning (or mid afternoon for those watching in the UK) lit up by Charley Hoffman with a rather impressive round of 67, which featured no less than 5 birdies and an eagle. Hoffman closed the round in impressive style with an eagle on 15, followed by a birdie 2 on the short 16th, a par on the 17th and a birdie 3 on 18 to close, this 4 under par stretch turned a good round into a great one and just goes to show how quickly your score can turn at Augusta.

Another entertaining story emerged from The Big Easy, Ernie Els, who strolled round Augusta displaying an air of coolness that goes with a loveable swing and a 4 Major Championships. Els did reach -6 following a birdie on 13 and an elegant eagle on 15 but a bogey on 18 saw him return to the chasing pack. Another golfer in the pack who reached -6 before being pegged back was Jason Day. The talented Australian saw an incredible run of 5 consecutive birdies from 12 ended with a bogey on 17. Unsurprisingly we’ll expect another challenge from Day here, his game just seems perfect for Augusta.

European hopes were carried by Justin Rose and Sergio Garcia. Rose reached the mark of -5 through 15 holes with just the one blemish at the incredibly demanding 11th hole. He is a seasoned campaigner at The Masters and it is no surprise to see him fairing well here. Garcia’s game looked solid as he strolled round in 68 with just one bogey on the card.

Form player Paul Casey finished on -3, as he continued his great golf on the PGA Tour into Augusta. The sensational striker from Surrey reached the mark of -3 through 12 courtesy of 9 pars and 3 birdies. Simple golf if you can get it. It would be some story if Casey could continue this golf into Sunday but you can’t help but feel that The National will bite back at some point.

This bite was seen very evidently with Ian Poulter. Fancied by many prior, Poulter turned in 34 (-2), only to find himself at +2 standing on the 13th tee. And whilst he did manage to recover some of the damage done on 13 and 15 with birdie 4’s, Poulter’s round unravelled once more with a double bogey 5 at the short 16th to finish on +2 for the round.

Few would’ve expected Rory’s challenge to feature so far down the leaderboard, his round of 71 doesn’t leave him totally out of it but it certainly will make for one of the best Masters in history if he chases down a surging Spieth. We’ll be hoping for fireworks on Friday and Saturday to put McIlroy back into position but can’t help but feel he’ll need a very low number to get back into contention as the course, following the rain earlier in the week, looks set for good scoring.

Tiger Woods finished with 73 with a couple of scrambles mixed in with missed opportunities. Few would’ve predicted that score with two ends of the spectrum shown amongst the Patrons this week...

“He’ll win for sure, he’s back and they can put the Green Jacket on him now”

“He has no chance"

Well Tiger is sat in the middle of those opinions currently. Had a few more putts dropped he could’ve easily been 2 or 3 shots better which would’ve seen him really in contention. Fingers crossed for all he has a good round tomorrow as it’d be fantastic to see him in the mix for the weekend.

YGT Ambassadors Darren Clarke and Lee Westwood found themselves at +2 and +1 respectively with Clarke suffering a stretch of 2 double bogies in 3 holes on the front 9. His ball striking looked as impressive as ever and was unlucky not to score better with putts just missing around Amen Corner. Westwood recovered well from a bogey at 11 and a double at 12 to birdie 14 and 15 to see him get back in touch with the chasing pack. Westwood & Clarke’s result this week takes on extra significance because if either is placed in the Top 5, qualifying bookings with YGT will receive a full refund

Picking through the crowds on Berckmans Road and Washington Road this morning, there was a palpable difference in the atmosphere. Where Wednesday and the other practice days were jovial and light hearted, Thursday at the Masters takes on a nervous edge. For the patrons, the feeling was one of anticipation, with glances at start sheets and pin placements, nods to form guides and debates over the merits of the morning tee time versus an afternoon slot.

Inside the gates, through the airport-style security and past the Masters 'Greeters' (yes, there are people there simply to wish you a great day at Augusta National), the changed mood seemed to have transmitted to the players, too. The competitors, who just 24 hours ago were larking around the par-3 course, wore serious expressions. Game face time..

.The atmosphere around here is fantastic; it is hard to believe how much it grows day on day. Expect Masters Fever or Augustaivitus to spread worldwide before we see a Champion crowned on Sunday with the best item of clothing in golf.

Jordan Spieth at The Masters