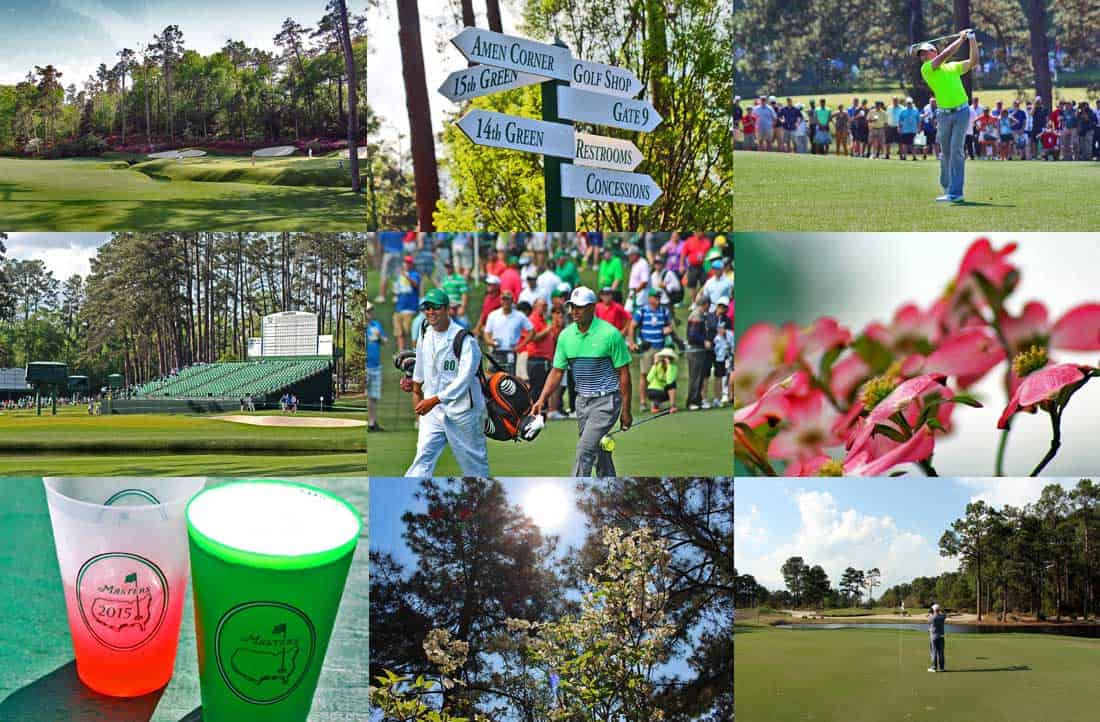 My 1st Experience Attending The Masters at Augusta National

So that’s it. The 2015 Masters has come and gone and after getting back to London after a seriously sleepy (Augusta beat me!) flight from Atlanta, I reflect on what was one of the most magically memorable weeks I’ve ever had.

From arriving in the Deep South and experiencing the electric buzz of the patrons as well as the infinite charm of the locals (Southern hospitality is no myth!) who swarm all over Augusta during Masters week, to getting into the course for the very 1st time and all the way through to watching the conclusion of The Masters on Sunday evening, my #YGTMasters trip has left me wanting more, more, more!

HIGHLIGHT OF THE WEEK

Seeing Augusta National in person for the very 1st time

Grander than I could have imagined!

PRACTICE DAYS - AS GOOD AS THE TOURNAMENT PROPER

As some of you may have realised over the course of Masters week, myself (YGT Rory) and Mark Crossfield were lucky enough to be attending the practice days at the 2015 Masters, cameras in hand, to try and get as many snaps of the course and players as possible in order to give you guys a better idea of what it’s really like to attend the greatest show in golf.

While I’m sure the electric atmosphere at Augusta National would have been increasingly palpable as the week, and indeed the tournament went on, attending practice days is amazing in its own right and thoroughly recommended.

The atmosphere is still intoxicating, with whispers of big name players approaching your vantage point of choice, as well as stories of incredible shots and sightings of celebrities being passed around between the ever friendly patrons.

The players are more relaxed too, cracking jokes with the crowd, hitting multiple balls from all angles while trying to get a feel for Augusta National and of course, there’s the brilliantly fun and light-hearted skim-shot challenge that plays out on the par 3 16th. Myself and Mark set up camp (with our trusty Masters chairs in tow – more on that later) directly behind that tee and sat and watched as the world’s best players had a laugh attempting the shot, with Justin Rose almost holing out for an ace as we looked on...what fun!

While seeing the likes of Tiger Woods, Rory McIlroy, Phil Mickelson and of course the eventual Masters Champ Jordan Spieth hitting shots up close and personal is a great experience, it was the course itself that was the real star of the show for us.

It’s said often enough that it has become one of golf’s biggest clichés but to understand the true splendour of Augusta, you REALLY DO have to see it with your own eyes!

The sheer scale of the place is almost unfathomable – you could quite easily squeeze a whole 9 hole academy course between the 18th fairway and the early holes on the course! – with the pristine fairways carving their way through towering pine trees and great swathes of azaleas and various other flowers, towards giant putting surfaces, the slopes on which are as dramatic as the back nine on Masters Sunday!

Everything is so grand in fact that if you took one of the bunkers from Augusta and installed it onto a typical UK course, the sheer size of it would look quite ridiculous! At a course as grand as Augusta though; everything is right at home.

Once you’ve become acclimatised to the vastness of the place, you start to appreciate the endless nuances of the course and holes you’ve spent your life watching enviously on TV are better understood and even more special.

The 1st tee shot takes on a whole new perspective and as you make your way around the course you realise how important the par 5s and 3s are to scoring at The Masters. Apart from the 8th the par 5s are all easily reachable for most of the field and the par 3s are much more treacherous in person than they appear on TV.

Amen Corner is every bit at magical as you’d imagine. A melting pot of stunningly beautiful holes which demand dramatic and potentially perilous shots from the pros. Everything down in this corner of the course is in close proximity so it’s a great place to set up camp for a day’s play. Be warned though...it’s understandably extremely popular so get there with your Masters Chair in hand early doors to have any hope of securing a spot!

From there on in there are more iconic holes on which to perch, not least the par 3 16th where you’re treated to plenty of close misses for holes in one thanks to the nature of the slopes on the green, not to mention the skim-shot challenge which the pros are almost obliged to take part in thanks to the cries of “SKIM IT!” which come from the gallery as soon as the serious practice tee shots are done with!

Ending your time at the Masters Practice Days with a walk up the 18th hole towards the vast merchandise shop which awaits on the way back to the entrance gates simply builds the excitement and gets you ready for the tournament proper.

Attending The Masters for the very 1st time can be a bit overwhelming. First off you’re undoubtedly going to feel like a kid in a candy store...who’s on a sugar high before even arriving!

Which players do I want to find on the course?

How do I find out where they are and what swag do I need to buy from the souvenir shop to satisfy the baying mob back home who all want their own slice of Augusta?!

To make sure you make the most of your 1st Masters experience, here are some handy tips to bear in mind for your trip to The Masters...

We were sceptical having been told you can plop your chair down and leave it unattended for as long as you like but having bitten the bullet and put this to the test I’m happy to report it’s true!

On the second practice day when we’d eventually coughed up the $35, we popped our chairs down and spent an hour or so on the 8th tee before leaving our beloved new purchases for a bit of wander around the course. Returning over 3 hours later, there they were, still in the exact same position as we left them! By this time the crowds had swelled and the view through to the players on the tee wasn't the best...no problem! A few polite requests and a gentle nudge here and there and we were back in our seats and at the front of the crowd...prime viewing!

A Masters Chair really is an ESSENTIAL and WELL worth the money...just be sure to get to the course early to secure one of the best viewing locations and it’s job done for the day!

Security at The Masters is tight and you are simply not allowed any form of camera on Tournament Days so take advantage of the fact that you can bring one on Practice Days. It would be a crying shame to leave Augusta without a few pictures of your favourite players playing on the world’s most iconic golf course, or indeed of yourself with famous holes such as the par 3 12th or the par 5 13th acting as the perfect backdrop.

Don’t hesitate to talk to other Patrons to find out who’s already been around the course and where certain players were last spotted. Everyone is high on the Masters buzz and most are more than happy to chat and share advice. There are plenty of Patrons who have been going to Augusta for years (you can usually tell who they are as they are flush with memorabilia from years gone by!) and their insider’s knowledge can be invaluable!

Similarly, the officials on the course (who are all easily identifiable) are all extremely friendly too and will be happy to help when you need it.

While the players are there to do their homework on the course, some are noticeably relaxed too so when the time is right, it’s not uncommon to see them sharing a joke or two with the Patrons. Be respectful but don’t be shy to ask a question or two when the time is right...you might gain some pretty unique insight into what it’s like to play at The Masters!

Unlike other high-profile golf events, food and drink at The Masters is more than affordable. $1.50 for a sandwich whether it’s the Pimento Cheese or BBQ Port variety is cracking value, as are the soft drinks. For an imported beer you’ll have to fork out $5 but that’s still affordable and with any drink you get to keep your Masters Cup; a great souvenir and the perfect addition to your desk at work to make your golfing colleagues jealous!

It can get HOT in Augusta and with the high humidity, dehydration is almost a cert if you don’t have a few soft drinks to supplement your daily beer intake...the pink lemonades in particular are deliciously refreshing! We know it’s tempting but you’ll be spending plenty of time in the sun so be sure not to wreck your evening or indeed the following day by over-indulging on the amber nectar!

7 – Learn Your Way Around the Course

On your first day at Augusta National, try to pay attention to the best routes around the course. Needless to say, certain areas of the course, Amen Corner for example, are noticeably busier than others and if you’re trying to make it to a certain hole to catch a certain player or indeed away from the action to the concessions or bathrooms, make sure by your second day you have a better idea of where you’re going so you minimise your time getting from A to B and maximise your time watching the action.

AWAY FROM THE COURSE

As you might imagine the town of Augusta itself comes alive during Masters week, with countless golf fans streaming in from all over the world and the locals too adding to the buzz.

Just outside the main gates of Augusta National you’ve got Washington Road which is where most of the action takes place away from the course, both during the day and long into the night.

The likes of Somewhere In Augusta, T-Bonz, Tin Lizzy’s and of course Hooters, an Augusta establishment and a home away from home for John Daly for the week, are all worth a visit whether it’s for dinner or a few drinks.

There’s a real party atmosphere along Washington Road, with putting contests, games and live music to add to the entertainment and just a short drive away, you’ll find Downtown Augusta which is home to more bars and restaurants with a slightly more relaxing vibe. If you want escape the Masters madness, venture away from Washington Road to Downtown Augusta, or indeed to one of the many restaurants dotted around in more solitary, quiet spots.

WOULD I GO BACK?

As you can probably tell from my excited, hyperbolic tone throughout this article, attending The Masters was simply amazing and hopefully it’s NOT going to be a once-in-a-lifetime experience for me.

I for one aim to be one of the old boys walking around Augusta in years to come, showing off my past Masters badges and other swag I’ve bought form the Masters shop in years gone by. I ticked plenty of boxes on my 2015 Masters trip but I’m sure there is still so much to see! Roll on 2016...