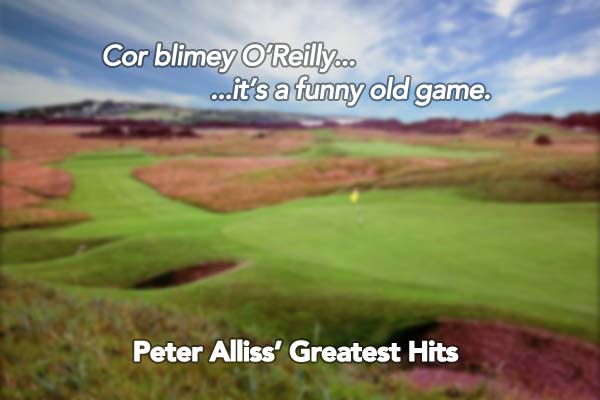 The Open Championship is the highlight of the golfing calendar for golf fans all over the world; the oldest major in golf and a championship that reeks of tradition and prestige. Played on the age old links that are deemed worthy by the R&A to be included on the Open Rota, The Open Championship is unlike any other tournament. The Open recipe is full of unusual, unique and unpredictable ingredients and there is little doubt that Peter Alliss is an essential one.

“I can’t see, unless the weather changes, the conditions changing dramatically.”

Thanks for the forecast Peter!

“One good thing about rain in Scotland. Most of it ends up as scotch.”

Another gem on the weather from Alliss.

Alliss describing the 1st five holes of Duffy Waldorf in the 2nd round of the 2002 Open Championship at Muirfield.

Carnoustie, a flamboyant Frenchman and Peter Alliss = one of the most iconic moments in Open history.

“Although it’s a narrow green; it’s a wide green.”

Hmmm…you’ll have to give us a minute on that one Peter.

“It’s like turning up to hear Pavarotti sing and finding out he has laryngitis.”

On Tiger’s 3rd round 81 – the worst of his professional career – at the 2002 Open Championship.

“He used to be fairly indecisive; but now he’s not so sure.”

You don’t often hear “GET IN THE HOLE” being shouted at the Open but it does happen. Luckily Alliss has the perfect plan to cut it out.

“And now to hole eight, which is in fact the eighth hole.”

To be sure, to be sure eh Peter?

“I can remember, before you found all sorts around the Open, when the only thing you could buy was a doughnut from a tea-shop.”

Alliss reminisces on the simpler days.

“It looks at bit like Braveheart all about. I tell you, if William Wallace should come galloping out of the rushes…I’m off!”

“In a split second, that lovely sand will envelope his sweet face and he’ll wonder why he bothered having a shampoo this morning.”

On Tiger hitting out of a bunker while facing into the wind at Muirfield in 2013.

Off on a tangent about Colin Montgomerie’s need to return low scores around the turn.

One of Peter’s more controversial moments…

“The hunt continues. At this point, they’re likely to find Sir David Attenborough in there.”

On looking for golf balls in the challenging rough at the Open.

Alliss: “What do you think of the climax of this tournament?”

Peter Thompson: “I am speechless.”

Peter Alliss: “That says it all.”