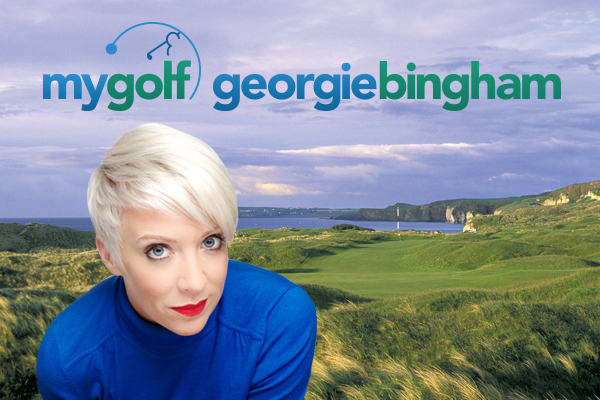 Georgie Bingham: Inside the Ryder Cup and a round with Sir Steve Redgrave

Georgie Bingham should be no stranger to golf fans, having covered the Open Championship, US Open, USA PGA Championship and the Ryder Cup to name a few. She’s a regular on the Pro-Am circuit, where she’s had the chance to play with some of golf’s greats and celebrities from the world of sport.

A good friend of yourgolftravel.com, Georgie has an amazing history in sports broadcasting, having also covered football, cricket, rugby, tennis boxing, cycling and more for a host of top broadcasters including ESPN, Sky Sports, ITV, Channel 4 and BoxNation.

Currently the host of talkSPORT’s Weekend Sports Breakfast alongside Micky Quinn, the show posted record listening figures in 2014. YGT’S 19th Hole caught up with her and learned about what it’s like behind the scenes on tour, her favourite golf courses and who she most admires in the world of sport.

You’ve covered a huge array of sports across the globe, where does golf rank amongst your favourites?

The more my love of golf as a player has grown the more I’ve wanted to cover golf tournaments over anything else. I don’t think we’ll ever get the Olympics or Paralympics again like we did in 2012 and as much as I’d love to cover them it doesn’t get better than covering golf tournaments. Every major is so unbelievably different and every two years you’ve got the Ryder Cup. As my career has gone on the more I’ve wanted to cover golf.

Behind the scenes, what differences do you see amongst the competitors when they’re at The Majors compared to the Ryder Cup?

I wouldn’t say one is different to the other in terms of intensity from the players but the Ryder Cup is a team game, you don’t see that very often in golf, and is the biggest event. It’s game on from day one. In a Major you may be raving about someone on day two who might be nowhere by Sunday, whereas the Ryder Cup is high octane right from when the first person tees off. As a journalist the Ryder Cup is much more fun, although it can get a lot more complicated trying to work out where the points come from.

Golfers rely on themselves to win tournaments but here you get to see them back someone else and I think they love it. The press love it too, particularly when we’re winning. The Europeans are in a wonderful vein of form and let’s never feel sorry for the Americans, they absolutely hammered us for the first few years of the competition so I have no sympathy for them if they can’t beat us!

Is there anything you see from the players as a broadcaster that we don’t see as spectators?

I think golf is a really good-natured sport, the guys that play don’t seem to lose their appreciation of the crowds and the press and are very friendly. Golf spectators don’t miss out on that much, they get to go to the practice ground and very near the greens and tees. With the exception of a few notables the players can shoot a 76 and turn round and say to press: “I’ll try and be better next time.” I think humility is important. They work incredibly hard and most people don’t appreciate the five hours spent on the putting green on a Monday, Tuesday, Wednesday, the practice rounds, the effort they put in every single day of their lives.

When did you first swing a club?

I was given a second hand set of clubs in my twenties that knocked around my house for a while. I could always hit the ball a long way so could whack around with my mates but I didn’t start playing properly until I went to live in Miami and was be able to play some of the courses with my work mates. I used to be a horrendous golfer, playing off 36 but happily going round in 140. The last three years I’vee gone mad about getting my handicap down but my enthusiasm has really grown since I’ve got to go to The Open and other events.

I’ve just been cut to 16 and I should be playing off lower than that – I’m regularly accused of being a bandit. People see me on the tee and I’ll hit it straight and 240 yards, which is quite long for a girl, and then they won’t see my terrible third or my three putt, the things I’m working really hard on. My aim is to get down to 12 by the end of the year, which I think is achievable because I’m starting to play some quite competitive golf.

I’m so lucky that I’ve played so many amazing courses, but I played Royal Portrush with Darren Clarke for Your Golf Travel in 2013, early in the year. The sun came out and the wind wasn’t too horrific, which is surprising as it’s on the coast in northern Ireland and it really can blow a hoolie. It was just lovely. I hit a par on the first hole and I thought to myself, ‘I’m going to love today.’ Of course, it didn’t last, but it was such fun to play a course that I think should be one of the next Major venues. It’s also where my dad is from, I hadn’t been there for many years so I was able to see where his roots are – and we got to do a bit of whiskey tasting after so it was absolutely perfect.

Who’s your most interesting round been with?

I can never hit a ball in Darren’s presence so I would definitely put him near the bottom! I recently played the Portuguese Masters Pro-Am with Paul McGinley which was a real treat, he had a huge gallery of people following him. I played a tournament with Sir Steve Redgrave last year and he is one of my all-time sporting heroes. You can see why he won all those medals, he is so competitive and would never let up on me, I loved it. Was also a brilliant cheerleader and he soon realised I was a bit wet about putting out, but he was very considerate with his words to fire me up. We did win as well. I love playing with people more competitive than me – there are not that many of them.

Do you dress to impress on the course?

I’m very lucky to have a relationship with Lyle and Scott, who have a wonderful rage of colours. I tend to use Gap trousers as they have a lot of Flamingo and cherry pinks and I like to wear bright colours in the summer on the course, I like dressing up for the course. I think women’s golf fashion could do with a kick up the arse but savvy women golfers know how to mix golf wear with high street fashion to look good on the course. In the winter I’m the laziest, I put on a double layer of Galvin Greens, a layer of lycra underneath and nothing else. I can’t bear to be cold.

What’s in the bag?

Srixon and Cleveland. I’m tall and quite strong so tend to use men’s senior graphite because they’re firm but light which is perfect for quite tall, quite strong women and I absolutely adore them. I’m obsessed with my Cleveland wedges, it’s the first time I’ve ever loved a set of wedges.

Tough one. I’m a member at Foxhills in Surrey, there’s a giant double green at the top and on a sunny day you can stand on the terrace with a glass of Pimms or Prosecco and watch not one but two sets of fourballs come up the 18th. As I know lots of people there now it’s probably my favourite place, and it’s always sunny!