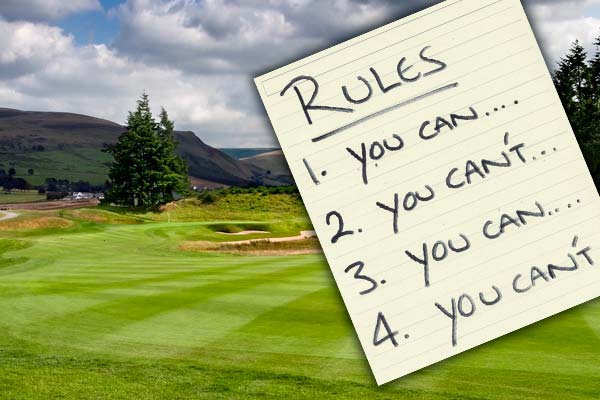 Apparently the drama surrounding “Rules Infractions” in golf during 2013 (Think Tiger Woods) are set to carry on into 2014 as well.

Instead of us all collectively patting Pablo Larrazabal on the back for his win at the Abu Dhabi Golf Championships, Rory McIlroy’s rules infraction seems to have been hogging the limelight.

“There are some stupid rules in golf, and this is one of them,” McIlroy told reporters after he was penalised. Let’s have a look at some other rules which many golfers might describe as “silly”…

Divots in the Fairway

You’ve just buttoned your drive plum down the middle of the fairway and as you approach your ball thinking “damn…even Tiger would have been proud of that one”, you realise it has come to rest in a divot roughly the size of a beaver’s tail.

Well…congratulations…you’ve just been penalized for hitting a fairway.

Now…before we get into this one, I do appreciate that defining exactly what constitutes a divot throws up a few grey areas. Could it just be a patch of worn out fairway rather than a divot? Perhaps.

There is also a strong argument that a golfer should just roll with the punches because, while it is undoubtedly terribly unlucky to end up in a divot in the middle of the fairway, I have never seen a golfer throw their ball back into the trees when they have just received the good fortune of a “member’s bounce” which has sent their ball caroming back out onto the fairway.

However, on the whole, divots are pretty easily identified and if you get free drops from ground under repair, why can’t you get a free drop from something created by the guy in front of you who swings like Charles Barkley? Divots are not natural to the course; they are a man-made change to the playing conditions.

When you’re playing competitive golf, whether it be at the monthly medal at your local club or on the PGA Tour, you’re not allowed to ask what club a fellow competitor has hit. Seems fair enough as golfers can surely gain some sort of advantage by having a slightly more educated guess as to what club to hit from a par 3 tee let’s say.

However this is where the rule gets a little silly. You can look in your playing partner’s bag and find out for yourself and he is allowed to tell you without you asking. You just can’t verbally ask….otherwise a 2 shot penalty will be in the offing…why?

One thing I have never understood is why golfers who hit shots out of bounds are penalised a stroke AND distance? When you lose a ball in a water hazard you don’t have to hit your next shot from the original spot so why not treat OB like a lateral water hazard. You’d still be penalised for hitting an errant shot…why such a harsh punishment?

You’ve just hit a miracle escape shot from behind a tree and your follow through has caused your club to smash into the trunk and bend. No worries…carry on using it if you feel confident enough to do so!

However, damage a club “outside of normal play”, use it again and you’ll be automatically disqualified for using “an altered club”.

So what happens if a slightly portly playing partner trips, falls on your bag and bends all 14 of your clubs? Is that considered outside of normal play?

If you’re stupid enough to damage your own clubs through anger, playing the rest of the round and potentially having to use defective equipment, plus the cost of replacing the club, should be punishment enough!

We all know you can’t ground your club in a bunker. You could be being naughty and testing the surface, thus improving your chances of hitting a good shot. However, and I’m not sure many golfers would know enough about the rules to escape the punishment dished out to Stewart Cink at the 2008 Zurich Classic…

Cink ended up being disqualified from the tournament for signing an incorrect scorecard (more on that later) after not realising he had fallen afoul of one of golf’s quirkiest rules.

With Cink’s ball coming to rest just outside of a fairway bunker, he was forced to take his stance in the sand. His next shot flew into a greenside bunker which he played out of, going on to finish the hole and marking his score.

Cink’s scorecard mishap occurred because he had failed to add on the two shot penalty incurred because his caddy had raked the fairway bunker before he had played from the greenside one.

Rule 13-5 indicates (not sure if this is still the case?) that a player cannot test the condition of the hazard…or any similar hazard!

In essence golf’s rule makers would have preferred Cink’s caddy to carry on, leaving the bunker in a mess, ready to really punish the next golfer to enter it…come on guys…that’s just not cricket!

This one applies to professional golf more than the amateur game. Now…in no other sport does a player have to count their own score and with the resources available in the game of golf, why can’t each group have a scorer (and a referee for that matter) assigned to it to keep score? In fact, in an age where virtually every shot is captured on film and  / or witnessed by hundreds of people, why are scorecards required at all?

And if scorecards are pretty much obsolete at the highest level of the game, why are players still punished for signing for the wrong score?

When Jackie Pung walked off the 18th green at Winged Foot 1957 US Women’s Open with a 72-hole score of 298, she thought she had won. It was later discovered that she had signed for a 5 for the fourth hole instead of the 6 that she really made. Even though the 18-hole total on the card was correct, Pung had signed a wrong card so tournament officials had no choice but to disqualify her.

Another rules mishap occurred at the 1968 Masters and this one has gone down as the stuff of legend. Upon finishing his final round apparently tied for the lead, Roberto De Vicenzo realised his playing partner had marked him down for a par on the par-4 17th hole, even though he had birdied the hole.

If a player signs a higher score than played, the signed score stands! De Vicenzo missed a playoff by that single shot and responded to the mistake by saying, “What a stupid I am.”

If someone can explain the logic behind either of these decisions, please do…if everyone knows the score, why are we forced to ignore that fact because of a pen scrawl on a piece of card?

While some of the rules of golf are viewed as silly by many, there are a few I’d like to see introduced…let me know what you think!

1 – There should be a two stoke penalty for any golfer who tees off with iron head covers on their clubs.

2 – A ball retriever should count as a club…it’s just a golf ball!

3 – Every practice swing after your first one before each shot should count as a stroke…get on with it!