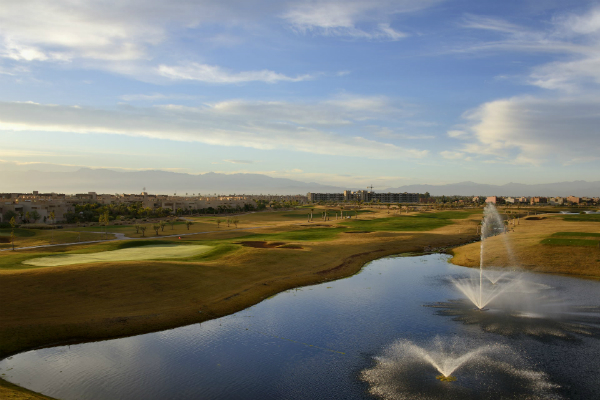 By Nich GoldieDecember 14, 2016No Comments

Everyone’s heard of Monty, whether it’s for winning 8 European Tour Order of Merits or for his undefeated singles record at the Ryder Cup or for his unorthodox swing. “You must complete your backswing.”

But most recently you may have heard him on TV sharing his opinion on the latest golf events. He’s never shy to say what he thinks and gives some statements that would rival Michael Owen for pointing out the obvious:

Luckily he was better at playing golf than he is at commentary, and has to go down as one of the World’s Greatest Golfers to play the game:

Monty clearly has a talent for understanding Golf courses. 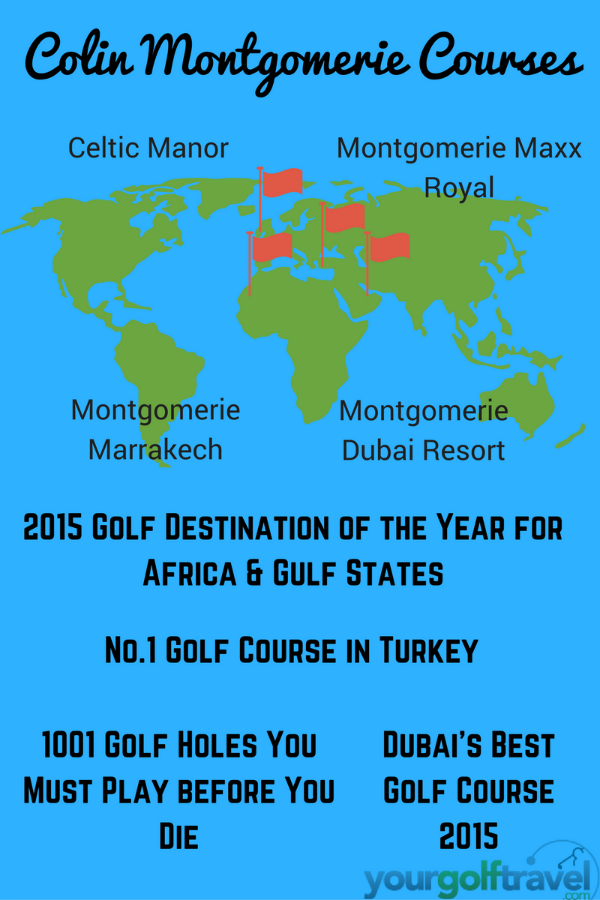 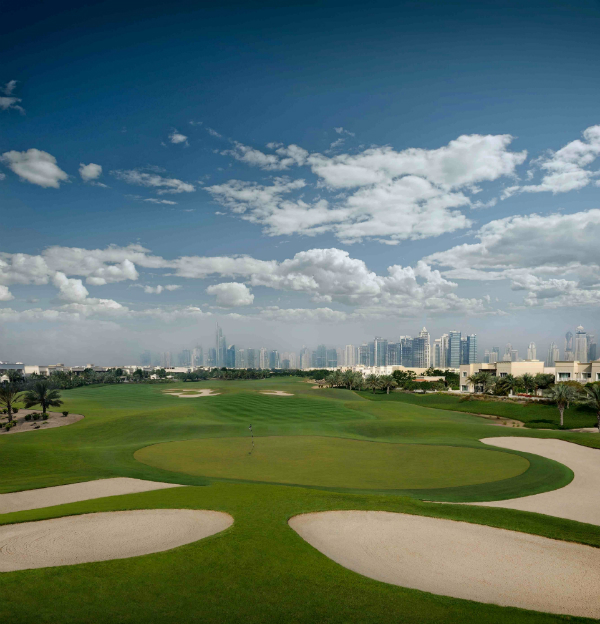 First to be designed on the list is The Address Montgomerie Dubai in the Emirates Hills of Dubai, which was opened in 2002. Guests have the choice of a floodlit 9-hole Par 3 Academy course or the Montgomerie designed 18 hole course which has 4 tees to choose from:

The Address Montgomerie Dubai features some of the most creative layouts to their holes, with a variety of water holes designed into shapes and islands! Much more than your standard lakes. Who knew Monty had this creativity in his locker!

Some of this creativity can be seen on the 4th hole which is named the ‘Snake’. The fairway meanders like a snake’s body around a ridge in the middle of the hole and the bunkers behind the green create snake eyes.

Another hole to note and is certainly one you will want to take pictures of, is the Par 3, 13th. This hole is designed in the shape of the U.A.E and features an island fairway, island green and a 360 degree tee box, so you can see the full perspective of your shank. Only joking, you shouldn’t be shanking it off this tee as at only 131 yards from Blue tees it should be an enjoyable hole to both play and look at.

The 18th hole is a massive 656 yard Par 5 from the backs, with an island fairway that has water left, right and even through the middle of the fairway towards the green. Every shot needs precision or else you will be short of balls by the end of the round. The one let up of this hole is that the green is fairly flat so once you get it to the putting surface a 3 putt is unlikely…unlikely but not impossible. This is definitely a hole I fancy beating my record 10 shots on one hole. 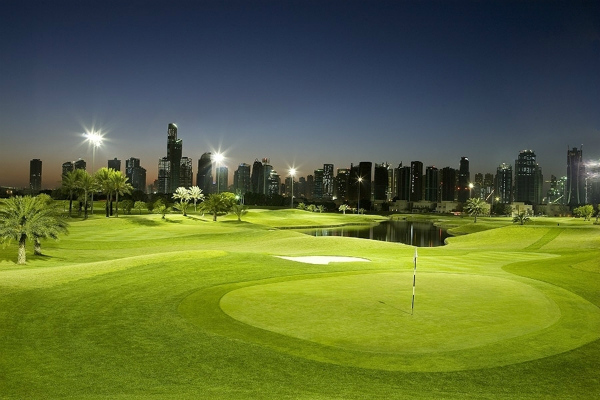 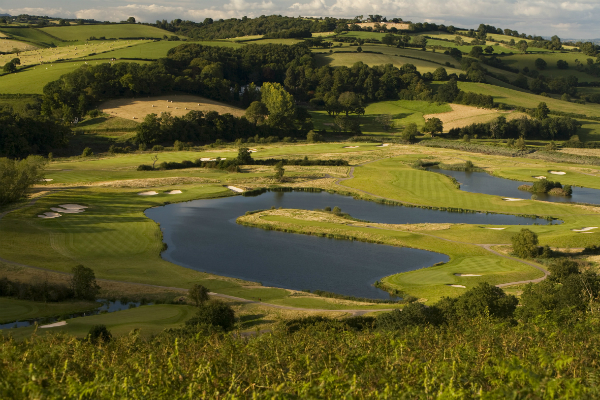 Now everyone thinks Celtic Manor…Colin Montgomerie…2010 Ryder Cup. What a year I must add!

But Montgomerie’s presence at Celtic Manor dates back to 2007 when the Montgomerie Course was opened. Montgomerie re-designed the then Championship course into a now challenging par 69 that features 5 Par 3s and only 2 Par 5s, as well as developed pot bunkers and unrivaled elevation changes to give the course distinct character. Visitors have 3 tees to choose from:

The 3rd hole on The Montgomerie Course has to be the stand out hole on the course. With the view from an elevated tee of the Usk Valley and the pines bordering the fairway this hole will make you question if you are actually on a beautiful ski-holiday in the Alps. The severe drop in elevation will also make it memorable post-round and inviting during the round as a par 5 at 609 yards downhill, it’s an enticing birdie or eagle chance for the long hitters in the summer.

You can easily see why this hole featured in the book ‘1001 Golf Holes You Must Play before You Die’! 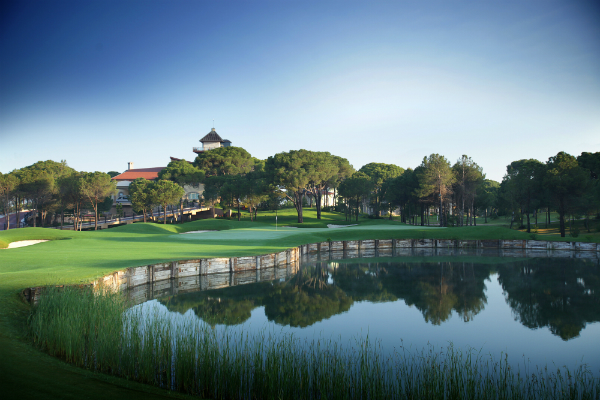 Also opened in 2007, is the ‘No.1 Golf Course in Turkey’ (Leadingcourses.com) which has become famous for hosting the 2013-2015 Turkish Airlines Open, which is a significant event on the European Tour as players reach the close of the Race to Dubai. Victor Dubuisson has been victorious at the Maxx Royal twice and Brooks Koepka won his first European Tour tournament here in 2014.

The main features of this Monty course are Pine forests lining both sides of every hole and a number of water hazards due to there being 8 lakes, so accuracy off the tee is the order of the day around the Maxx Royal. Also with an unusual mix of 5 Par 3s and 5 Par 5s, there is never a dull moment around the course as every hole offers a different challenge.

5 Par 3s is also 5 chances at a hole in one! And a chance to get yourself on the Hole in One Leaderboard at the Golf Club.

This increase in Par 3s, does create a shorter course but with 4 tee positions you can play off whatever is comfortable:

The 13th hole is probably the stand out hole on the course and sure to stick in the memory. It is a 506 yard par 5 off the Whites, but don’t let this distance fool you into an easy hole as you can be out of position from the middle of the fairway! This is because 2 tall pine trees sit in the middle of the short grass so if finding the fairway was hard enough from the tee, it just got harder. If you do have laser-like precision then down the left-hand side of the fairway is ideal to give you the best line in at the green as the hole sweeps to the right…shock, Monty created a fader’s hole! Anything short and right, however, will be caught in the wasteland areas…before you start thinking you can slice it round the corner. A truly picturesque and exciting hole that will surely be a talking point after the round! 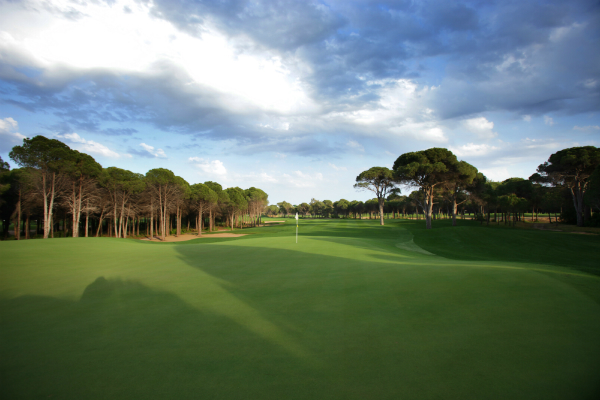 Montgomerie most recently lent his hand to design in Marrakech, adding to his stunning array of places to design courses. Having only been opened in 2014, the Montgomerie Marrakech was quick onto the scene and won the ‘2015 Golf Destination of the Year for Africa & Gulf States’ (Global Golf Tourism Organisation). This is of no surprise when you have 18 holes of Championship Golf and a multi-story Clubhouse with a nightclub! Luckily Monty only designed the course.

The course itself is characterised by large undulating fairways and greens as well as immaculate bunkers, so golfers can expect to be playing shots from a variety of angled lies as well as some fast big turning greens. Not sure why Monty went for this layout with his putting!

There is an element of Monty in the length of the course, however, as generally a shorter hitter in his career, this course features 5 different tee options of a slightly shorter than average course yardage.

The 18th is a 514 yard Par 5 off the whites and is certainly reachable in two. From the tee golfers will need to avoid the bunkers down the right hand side and the stream down the left which consumes any pulls. If you can manage this, you’ll be in prime position to attack this green in 2. The 2nd shot will then need to carry bunkers 50 yards short of the green and a bunker guarding the front of the green. However, the green is designed long enough so that it is receptive to this long approach therefore if you have the distance, the play is to sail the ball over the bunkers whilst avoiding the distinctive fountain and lake left of the green. Again Monty has put the danger on the left, so faders will enjoy this hole!

Overall, Montgomerie has outdone himself with these course designs. A mixture of water hazards, landscape undulation, fast greens, creative layouts and hosting professional tournaments make these courses a MUST play. I certainly look forward to seeing some more courses designed by Monty in the future.

I don’t want to congratulate him too early, however, as we know that didn’t end so well the last time…”Congratulations on your first U.S Open Victory.” (Jack Nicklaus, 18th green at Pebble Beach 2002)