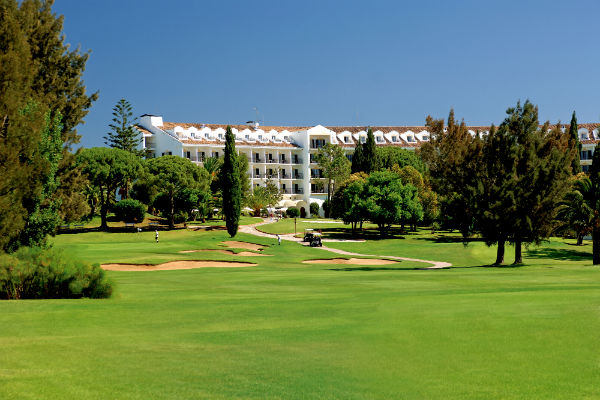 4 Ways to Beat Slow Play – Tested in the Algarve

Slow play is one of the hottest topics in golf at the moment, both in the amateur and the professional game. Reported times of five hours for a four ball to get round the course are becoming more common and taking what feels like eternity to play eighteen holes can be an extremely frustrating experience for most golfers.

Whilst there is a lot of discussion at the moment about finding a legitimate short-form version of the game, something along the lines of a twenty-twenty cricket equivalent for golf, we think that most golfers still want to enjoy a proper round of 18 holes, especially when on holiday.

We decided to put a few ideas to the test whilst on location in the Algarve. The courses in this region are undoubtedly among the best in the world and we certainly don’t think that a golf holiday here (or indeed anywhere) should consist of rushing around courses in a race to the 18th green, but we were of the opinion that slow play needs to be stamped out, no matter where in the world you are.
Our fourball trialed some different ideas at four fantastic venues, here’s how we got on: 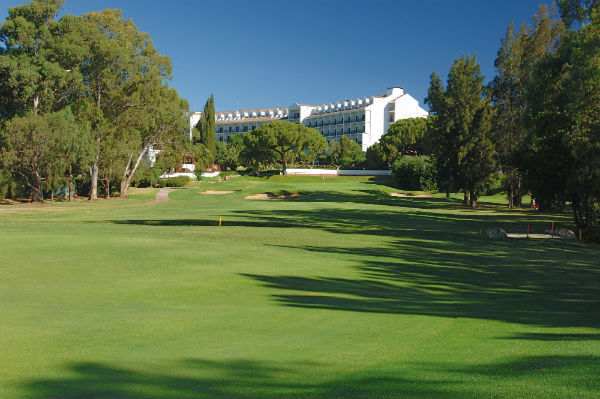 We took on the par 73 Championship course at Penina on our first day in the Algarve. Opened in 1966, it was the first golf course ever built in the Algarve and seemed a fitting place to start our test. The concept of ‘ready golf’ seems to be one of the most obvious ways to cut down wasted time on the golf course and is pretty simple to implement. Before we tee’d off, our fourball committed that we would all take our shot’s when ready to play safely, without worrying about honour on the tee or playing order etiquette at any point – the basic principles behind ready golf.

I would highly recommend ‘ready golf’ to groups as long as everyone agrees to it at the start of the round. It was great to cut out the endless conversations about who was next to play and not having to keep to the honour on the tee definitely meant we wasted very little time getting four drives away on each hole. A further bonus for me was that I found it more relaxing knowing that if I was technically first to play and had to grab some extra tees or double check my scorecard, I wouldn’t have a queue forming behind me whilst others were ready to hit.

There are a few things you need to bear in mind when playing ‘ready golf’. It is always best to declare your intention to play before you start your pre-shot routine, especially if you are playing ‘out of turn’. We had a few instances where two people were lining up shots at the same time, this can be off putting if one person then realises someone else is about to play and has to back off their shot. We also generally found that on the greens we played in turn most of the time anyway, especially if there was danger of treading on someone else’s line who was further out. However we did save time when someone was chipping on to the green and then had to move their bag or retrieve a putter before putting out.

All of our group agreed that playing ‘ready golf’ definitely made us quicker and for the most part had made the round more enjoyable. Out thinking as a group was that in a full-blooded competition, especially match play, it would be better if people could play in the correct order, particularly from the tee. All in all though, the concept of ‘ready golf’ generally just amounts to good common sense. Golfers should always be ready to play when it is their turn, but it definitely helps save time if you remove the stigma of playing out of turn so that the whole group isn’t held up when one player isn’t ready to hit. You do need to be careful on occasion to ensure that there aren’t several balls flying around at once and generally we would hope that our fellow playing partners wouldn’t use ‘ready golf’ as an excuse to go sprinting off down the fairway to play their own ball when it is 100 yards+ in front of the rest of the group! 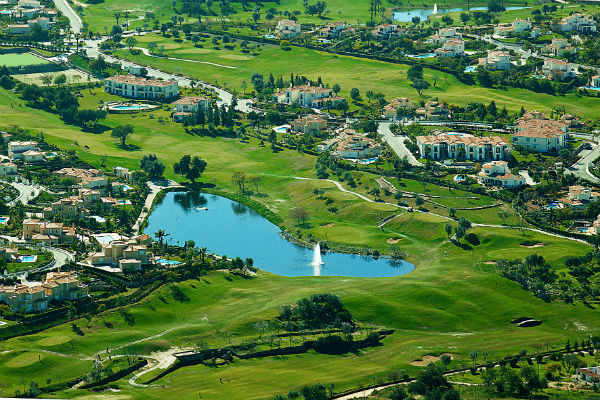 Our venue for day two came complete with two courses on site and another two within fifteen minutes’ drive, making it somewhere you could quite happily spend an entire holiday with very little driving required. Today we were playing the Vale da Pinta course, a challenging parkland layout that features a number of stunning lakes. Given the potentially tricky nature of this course, we felt it was a great choice for the test we had in mind.

Our plan was to test two formats against each other – standard strokeplay / medal vs. Stableford. All four of us played our own balls, but two players scored to Stableford rules and the other two to medal rules. For those who are not familiar with how Stableford works, a player scores points on each hole rather than having a total number of strokes at the end of the round. There is 1 point scored for a bogey, 2 for a par, 3 for a birdie, 4 for an eagle and so on. Handicap golfers will use their net score on each hole (if their handicap indicates they are owed a stroke on that hole) to calculate their points. Using this system, 36 points over 18 holes is what is considered to be level par.

The reason that playing Stableford can often save time over a medal / strokeplay format, is that the worst score a player can get on a single hole is zero points. When a player on a hole has taken too many shots to score any points with their net score for the hole, they can simply pick up their ball and move to the next hole. This means there is no more standing around or being forced to wait as someone takes 10 shots to finish a par 4, it also means that if you lose a ball and havent played a provisional, you are not forced to return to the tee in order to continue putting together a legitimate 18 hole score – you simply sign for zero (or ‘blob’) on that hole and move on to the next.

We definitely found that there were a number of times when players playing the Medal format were the cause of a hold up. This generally ranged from hitting extra provisional balls when a ball may have been lost to being forced to hole-out on all holes no matter what the score. There was also one occasion where a player had to return to the tee having not hit a provisional ball, as we were all certain that we would find his original tee shot. When the medal players were playing / scoring well, there was no discernible difference in playing times as you would probably expect, but we could categorically state that a group playing Stableford format will never be slower and often faster than the same group playing under medal / strokeplay rules.

As a handicap golfer, I will personally always play Stableford scoring rules when playing in casual rounds, especially when on holiday on a tricky course I have never played before. It is generally a bit more relaxing knowing that the worst score I can take on a given hole is double bogey! 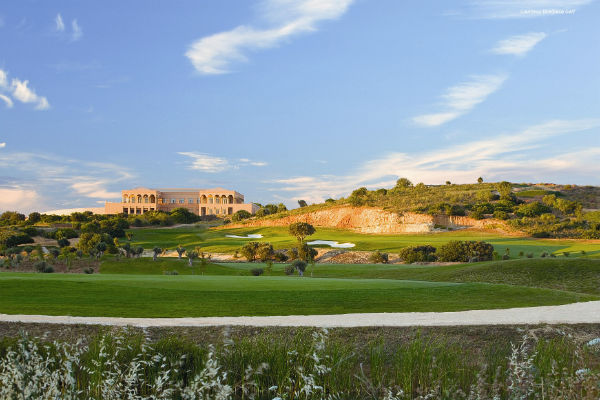 Today it was time to swallow some pride and play from the forward tees at the Oceanico Faldo course. With five different tee’s to choose from, this venue was perfect for the test. The longest the course can play is a whopping 7,200 yards from the Championship tees – the best part of 800 yards longer than the yellow tee’s that we elected to play our round from.
The concept here is quite simple – by shortening each hole we would be making the course easier to play and therefore it would take less time. As most golfers generally find their level of enjoyment is closely related to their score, we figured that playing from forward tees could also serve to make our round more enjoyable.

The higher handicap players in our group certainly had no issues skipping out on the 7,200 yard monster from the back tee’s, however there were times when the better players felt that the course had been shortened a little too much, with nearly all of the par 4’s coming up under 400 yards in length. However, if you want to speed up a round of golf, then hitting less driver’s off the tee and more approaches into greens from less than 150 yards is a sure fire way to achieve this. In terms of the enjoyment levels, whilst our group all agreed that shooting a terrible score is generally not much fun, playing from the forward tee’s does rob you off the opportunity hit your handicap whilst playing from the same tee’s as the pro’s – not something that happens very often, but when it does it probably represents a high point for most club golfers.

When deciding what tee’s to play from, it should come down to the self-awareness of the golfers playing. A scratch golfer will undoubtedly be quicker when playing from forward tees, but may feel that it is too easy for them. On the other hand a high handicapper who refuses to swallow pride and insists on playing off the tips is likely to have a slow and un-enjoyable round of golf. The other issue we have in the UK is that the front tee’s at our courses are usually designated as junior or ladies – due to this naming and potential stigma attached, most adult male golfers will not play off these tee’s no matter what their ability level. For this method of reducing slow play to really kick on in the UK, we would probably need to see a seismic shift in attitudes towards the different colour tee’s, however if you have a choice whilst on holiday, you should definitely put your ego to one side and choose the tee’s which will give you the most enjoyable experience. 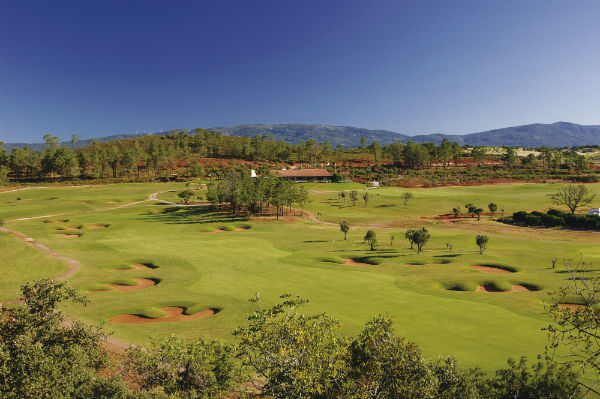 Our final time saving test was probably the most controversial – we all agreed that we wouldn’t take practice swings before our shots. Initially this was more difficult than it sounds, and there were of many points during the day when everyone in our group found themselves taking a practice swing without even thinking about it, as these things have become such a natural part of our pre-shot routines. There were also a few points when not being able to take a practice swing felt like more of a disadvantage, such as playing shots from off the fairway where you might often use a practice swing to test the ground and gauge how the ball is going to come out.

At certain points it did feel like we saved some time as a group by not taking practice swings, but a few members of our group found that this put them off a bit, especially on the first few holes as we all got used to just hitting our shots. As this method didn’t save a huge amount of time, we felt that it probably wasn’t one to recommend for the average group of golfers. For many, not being able to take a practice swing may cause them to hit more bad shots and hitting more shots / looking for lost balls will quickly add more time to a round of golf than a few quick practice swings before each shot.