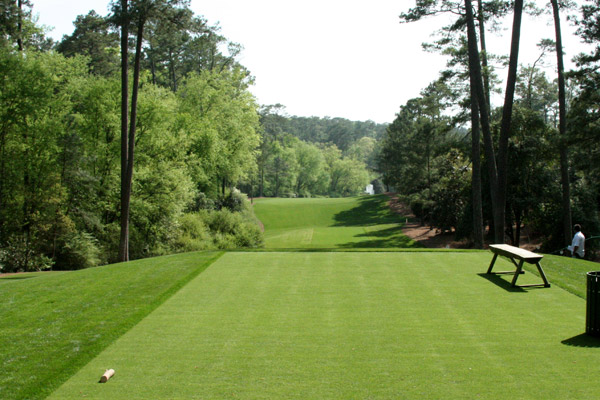 The hardest holes in the 2015 golf majors

It’s a funny old year for the major championships, with two being staged at possibly the world’s two most iconic and best-known courses and the other pair leaving us with more questions than answers.

The Masters at Augusta National and the Open Championship at St Andrews will give us plenty to drool over, of course, but the US Open visiting a new course, Chambers Bay, and the PGA Championship being played over a links-style venue at Whistling Straits means there is set to be a ton of variety in the majors this year.

Here the 19th Hole picks the four holes – one from each track – that we expect to be among the toughest and most pivotal in the majors this year.

Augusta’s famed Amen Corner – holes 11, 12 and 13 – is rightly seen as the place where the Masters can be won and lost, and the first of those is an absolute beast. The 11th is the toughest hole on the course and last year averaged 4.47 shots – not only is it long at over 500 yards, it is fiercely guarded by water on the left. If you escape with a four on this hole, you breathe a sigh of relief and get the hell out of there.

The hole is best remembered as the place where Larry Mize chipped in to beat Greg Norman in a playoff in 1987. But Charles Howell III has less fond memories: in 2006 he carded a 9 here.

A left-to-right dogleg that will give players a choice: take on the corner and make a much easier second, or play safe and face a devilish approach. Much will depend on the scoreboard but anyone taking the conservative option should beware – the second will be a blind shot and will play uphill, making club selection very difficult. A decent caddie could earn his corn here if he can get his man safely on the green.

The Road Hole may be the most famous golf hole anywhere in the world. A tough dogleg, it is made so difficult by its second shot. A treacherous bunker protects the front, and there’s a road at the back. Factor in how narrow the green is and the landing area leaves no room for error. On the final day the hole will be cut close to the bunker and only the bold or reckless will dare take it on. A decisive hole at the business end of the championship.

There have been many spectacular meltdowns here but perhaps the most significant was by David Duval in the 2000 Open – he’d been 54-hole leader but was chasing Tiger Woods for the title when he found the front bunker and took four shots to get out. Bugger.

Play at St Andrews with YGT

This hole is called ‘Shipwreck’, which tells you all you need to know. At 214 yards it’s not the longest par-3 the pros will play all year, but they won’t come across many that are more intimidating. Water all down the right and in front, and a series of bunkers on the left, make this a virtual island green – terrifying stuff.