Since its inception in 1927 the Ryder Cup has bought two sides of the Atlantic to do battle for the famous Samuel Ryder trophy. Initially starting out as a contest between the United States and Great Britain and Ireland before the Great Britain team extended its selection to include Europe. The Ryder Cup is a fantastic exhibition of sportsmanship and all of the qualities that are a pillar of the game of golf. Although there have been instances of gamesmanship, predominantly the Ryder Cup is remembered for great acts such as that of Jack Nicklaus conceding Tony Jacklin’s putt in the 1969 edition to tie the match. Although Nicklaus is viewed as the game’s greatest players with a record 18 Major titles, his act of sportsmanship here helped ensured he is remembered as one of the game’s true gentlemen. The US Masters is the start of the golfing season. With the Azaleas in full bloom, the perfectly manicured fairways of Augusta National is quite simply a course all golfers want to experience and enjoy. With a history that includes one of golf’s most famed individuals in Bobby Jones, the US Masters and Augusta National are etched into golfing history as an event all golfers want to be a part of and win. Although the course design has changed in recent years to adapt to new technology it still remains one of the best designed courses in golf. With fantastic elevation changes as well as incredibly well designed landing areas for both tee-shots and also approaches into greens, only the perfect shot will do at Augusta and as such is perhaps the best test golfers can enjoy in the modern game. As only a small percentage of golfers will ever get to play in these fantastic tournaments it is important to understand this from a spectator’s point of view. Obtaining Masters tickets is one of the most difficult events in the world of sport. Ryder Cup tickets on the other hand can be obtained with via official packages or alternatively entering the ballot which although is difficult at least everyone has an equal if slim chance of obtaining a ticket. Crowds at both events are very well attended however if you are looking to get close to the world’s top players the US Masters holds the trump card simply on the fact that the crowds are less and even around the likes of Tiger Woods it is normally no more than 2 or 3 deep, plus the elevations which make up Augusta National ensure you can get a great view very easily. The atmosphere at both events is electric, with roars coming from all around the course it is a joy to be part of. The back 9 at Augusta National is revered as being one of the exciting in golf, once the players reach the 12th hole they can experience a birdie or a bogey at each hole with relative ease. Regardless of where you are watching the action from you can hear the cheers of the crowd echoing around the pines which surround Augusta National. The Ryder Cup also comes alive on the last day singles, the only slight problem is given the number of games going on it is difficult to know exactly where the winning putt will be holed, so in essence it’s hard to know exactly where the game is won and lost.

With the 2010 Ryder Cup set to take place at the Celtic Manor over the brand new 2010 course, which has specifically been designed with the tournament in mind, should hopefully allow players the chance to have drama over the final 9 holes. The 18th will no doubt prove to be crucial in the result of the game. Measuring 613 yards off the Championship markers, the par-5 features a small target but more importantly a lake which guards the green to punish any shot that is less than perfect.

Want to experience golf’s greatest events? Your Golf Travel.com has a range of tournament packages to allow you to get inside the ropes and watch these great tournaments. 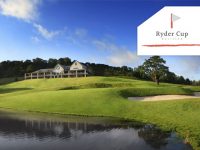 
Its the Masters every time for me. I think its a magic of Augusta that makes it so special. Although more people get to play in the Masters than the Ryder Cup I’m sure every golfer is with me in saying what a top tournament it is.


I’d do anything possible to obtain some masters tickets, the course looks amazing. For me being around the 18th green when the putts are being holed would be amazing.


It has to be the atmosphere of the Ryder Cup. As there are so few team events in golf the Ryder Cup is a really special event. I’d much rather play in the Ryder Cup as only 12 from each side get to play every two years.