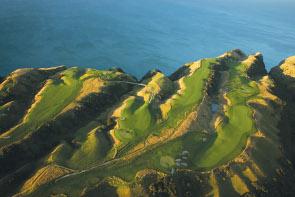 Golf is an eternal battle against old man par. While many events on the European and PGA Tours are won with scores significantly better, we take a look at the courses which provide the type of stern tests that few will win.

If you’re the sort of golfer who likes a course that eats handicap golfers for breakfast, you’re spoilt for choice. That’s partly because a decade or two ago, course designers’ egos started to get overblown, with some creations resembling layouts you might expect to see on an XBox, not from a tee box.

We won’t be cruel enough to mention these tricked up pretenders but there are plenty of truly challenging layouts that use the landscape, and landscaping, to challenge the golfer in a way that neither seems contrived nor ridiculous. Ironically, you could level the accusation of being both at the luxurious Legend Golf & Safari Resort in South Africa. The Extreme 19th has grabbed headlines worldwide. This par-3 hole is the longest of its kind – around 470 yards – and the tee is only accessible by helicopter as it is some 1000 feet above the green, perched on the edge of Hanglip Mountain. Hole your tee-shot and you can look forward to a $1 million cheque from the resort…however…don’t expect to get away without buying a very large round of drinks! Its saving grace though, is that the Extreme 19th is not part of the actual golf course here, which has had each hole designed by a golfing superstar such as Sergio Garcia, Padraig Harrington and Retief Goosen. It’s very much worth travelling to play both. 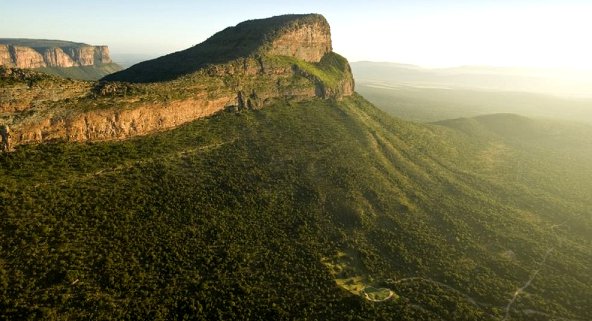 The Xtreme 19th hole at the Legend Golf & Safari Resort

Other courses blessed with stunning geographical features that add to the challenge on offer include Cape Kidnappers in New Zealand, which is full of gullies, deep fairway bunkers and cliff edges, Monte Mayor in Benhavis, Spain, with ravines and massive trees stalking every step of your round, and Stone Canyon Club in Arizona. This is an unforgiving course, to say the least, where a missed fairway will see your ball bounce off rocks into a desert full of scorpions, rattlesnakes and massive cacti with needles the size of kitchen knives!

The Blue Monster at the Doral Golf Resort, Florida, has less of a back-to-nature feel, but it doesn’t feel contrived either, and is undoubtedly one of world’s most entertaining golf challenges with its massive assortment of water hazards and deep bunkers. Doral and the Ocean Course at Kiawah Island in South Carolina, named America’s toughest resort course and blessed with a layout by Pete Dye, both manage to expertly tread the fine line between being challenging and overtly penal.

The Blue Monster Course at Doral

Believe it or not, the same can be said of the course at Jade Dragon Snow Mountain Golf Club in the Yunnan Province of China. The mountainscape scenery is breathtaking, and so is the yardage – 8,548 yards to be exact. Located at the western foot of Jade Dragon Snow Mountain, the 18-hole, par-72 course was designed by Neil Haworth, and has a 735-yard par-5, a 525-yard par-4 and a 270-yard par 3. But before you accuse him of largesse, consider the course’s elevation of 10,000 feet, which means your shots go much further than they do at sea level. It’s still a phenomenal challenge to carve out pars here but it’s one you’ll never forget for all the right reasons.

However, you don’t have to go as far as China to find courses that can offer the same. Some of the classics in Europe and the USA have been challenging golfers to their limits in all the right ways for decades and in some cases centuries.

There’s been a golf course at Carnoustie since the mid-1500s, and the current layout was laid out by Tom Morris Snr in 1867 and extended by James Braid in the 1920s. It’s been that good for that long and is arguably the most testing layout on the Open Championship rota…just ask Jean Van de Velde! Carnoustie is best known for its burn-riddled finishing holes, especially after Van de Velde’s Open Championship antics, but as well as being long and endowed with superb water hazards, the whole course is littered with cavernous pot bunkers. You’ll need your best game to even think about carving out pars around this very treacherous track.

The Barry Burn on the 18th at Carnoustie…The Scene of Jean Van de Velde’s self destruction!

Over in America, there are also some long-standing layouts that have stood the test of time and continue to make pars elusive, even for tour pros. Unlike many other pre-Great War courses in the US, Merion in Philadelphia has lost none of its teeth to old age. This links-style course is blessed with a layout that doesn’t have a weak hole anywhere, and it really will test every club in your bag. There’s plenty of penal rough and greens so fast and undulating they will inflate your score in the blink of any eye. The US Open at Merion in 2013 will be a treat.

Pine Valley is another sublime course in America that challenges players to their limits, but always earns their respect. Take a look at the many online blogs or press articles about playing at this very private club; you won’t find anything less than effusive praise anywhere. It officially opened in 1919 and it took three years for anyone to break 70! Oakmont, meanwhile, is considered by many to be the toughest course of them all, and it has hosted more Major championships than any other course in the US. This private club course is famous for the speed of its greens (they’re said to be actually slowed down for US Opens and other national championships!) and the penal quality of its bunkers is characterised by the famous “Church Pews” – seven parallel bunkers each separated by grass ridges (the pews) that catch drives at the third and fourth holes. Say a prayer here, and you might just be rewarded with a par. But you probably won’t be.