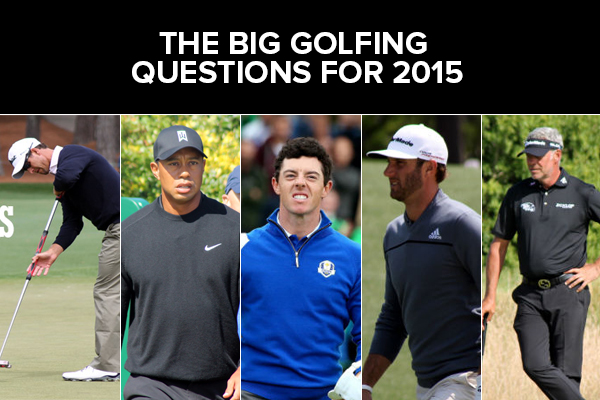 The biggest questions in golf for 2015

By Richard ForresterJanuary 8, 2015No Comments

The European Tour is in full flow and the third event of the season begins this week despite it being the first of the New Year.

It is a highly-anticipated year for golf and here are the five key questions that every golf fan wants answering.

1 – Will Rory McIlroy complete the career Grand Slam at the Masters?

McIlroy would be only the sixth man to achieve the feat after Gene Sarazen, Ben Hogan, Gary Player, Jack Nicklaus and Tiger Woods and won the last two majors he played in the Open Championship and US PGA.

Form of course is fickle, while the world number’s one record at Augusta is poor by his standards, with last year’s share of eighth place his best finish in six attempts.

However, the biggest stumbling block to claiming a first green jacket is likely to be the court case with a former management company which threatens to be embarrassing for all concerned and could see McIlroy spending considerable time in the witness box in February.

Verdict: Settling out of court is key to McIlroy’s hopes.

Buy a golden ticket to watch The Masters in Augusta here

The onerous task of following in the footsteps of Paul McGinley’s widely-praised captaincy at Gleneagles looks set to fall to either Darren Clarke or Miguel Angel Jimenez at Hazeltine in 2016.

Clarke has the support of several high-profile players – most notably McIlroy, who also supported McGinley – and Jimenez has hinted recently that he may be reluctant to take on the role as it could effectively signal the end of a playing career which otherwise shows few signs of slowing down at the age of 51.

Verdict: Clarke to get the job in March.

3 – Will long putters go out with a bang or a whimper?

The ban on anchored putting strokes comes into force on January 1, 2016 and will mean significant changes for some top players, including the likes of major winners Adam Scott, Keegan Bradley and Webb Simpson.

Scott has always insisted it will mean little difference to him, the Australian saying he will still use a long putter but simply move it away from his body. But while that will be within the rules, it be will interesting to see if the former Masters champion can really make the transition look so simple.

Verdict: Scott to win the US PGA in August to reignite the debate.

4 – Will Tiger Woods be a major force again?

It is a question which has been asked many times since Woods last won a major at the US Open in 2008, but one to which there is no definitive answer.

Woods won five times in 2013 but underwent back surgery last year in an abortive campaign that raised further doubts over his ability to add to his 14 major titles and challenge the record of 18 held by Jack Nicklaus.

The former world number one has acquired a new swing “consultant” in Chris Como and obviously still possesses the desire to compete, but turned 39 in December and time is against him.

Verdict: Good weather in The Open at St Andrews offers the best chance, but too many players can beat Woods now.

Exclusive packages to The Open are available here

5 – When will Dustin Johnson play again?

Johnson announced in August he was taking a leave of absence to “seek professional help for personal challenges I have faced”, leading to reports he had been suspended from the PGA Tour for six months.

The Tour denied Johnson was serving a suspension but if the big-hitting American returns to action at the start of February as expected – six months after his “leave of absence” began – that denial will sound even more hollow.

Verdict: Johnson to return in the Farmers Insurance Open at Torrey Pines.