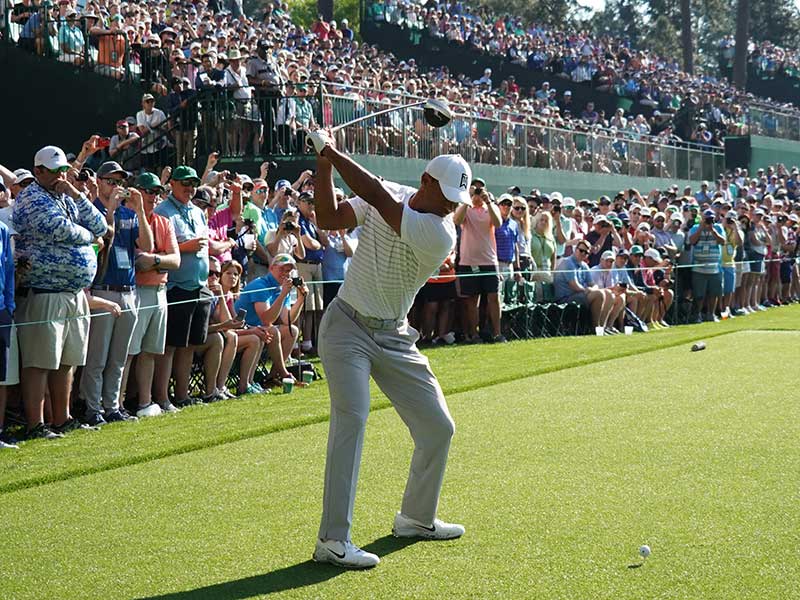 Tiger Woods at the Masters

In modern times, no-one has brought as much excitement to Augusta National as Tiger Woods. This man has won The Masters five times and goes into the championship defending the green jacket this year.

As Tiger completed his remarkable comeback victory in 2019, the world of golf watched on with a mixture of relief and utter joy. Tears were shed as this giant of the sporting world did what he did best and closed out his competitors. He had been threatening that he was back and now he had proven it.

Tiger Woods has single-handedly caused the course to be reshaped thanks to his game. Today on the blog we will be looking at some of Tiger’s most iconic Masters moments.

This was the year that Ben Crenshaw won his second Masters title. To everyone watching that week it was another great chapter in the history books of Augusta National, but something special also happened. A 19-year old Stanford University golfer had qualified as an amateur after winning the 1994 US Amateur. His name was Tiger Woods.

Serious golf fans had already heard this name but this was his first major championship and he was utterly unproven. That week he was the only amateur to make the cut and finished tied-41st at +5. He led the driving distance stats that week though, the years of the Tiger and his athleticism had arrived.

At this point, Tiger was still an amateur but his name was really starting to spread in the world of golf. Returning to Augusta National as the double US Amateur champion, excitement was building for what this young man could do against the pros. Well, it didn’t really go to plan at all.

A pair of 75s would mean that Woods missed the cut that year. Fans were entertained by the capitulation of Greg Norman that would see Nick Faldo take his third Masters. The arrival of the next big thing in golf was put on hold.

It is strange to think about this, but in 1997 Tiger was a new pro and the world didn’t yet know what was coming. He was touted as the next best thing and this was his time to show the golfing world what Tiger in the majors can do. After the first two days, Woods was atop the leaderboard by 3 over Colin Montgomerie, it was tight. Then things started to change.

Stunning golf on day 3 took the rookie 9 shots ahead and we all know what happens when Tiger is in that position. On the final day he carded another steady -3 to win by 12 shots over Tom Kite. That Tiger Sunday Red prowling around Augusta National had arrived. The world of golf had changed.

It is easy to forget, given the ridiculous hype and excitement that followed Tiger’s win in 1997, however, his professional golf career was still fledgeling. Showing up as defending champion in 1998, Tiger played four solid rounds but he would ultimately see his friend Mark O’Meara take the title.

In 1999, Woods would secure his second major but it didn’t come at Augusta National. His final round 75 made for a weak finish and Jose Maria Olazabal would win. Tiger was nine shots back but his experience of Augusta was growing. He was getting ready to win again.

In the early 2000s, the golf world was now very well aware of who and what Tiger Woods was. He had taken golf by storm and was achieving everything that people had said he would. As the 2001 Masters came along, Tiger was holding three consecutive major championship titles. A feat that was truly outstanding in modern golf. This trip to Augusta was his chance to hold all four at one time, The Tiger Slam.

Coming home with a score of -16, Tiger beat David Duval by two shots to win his sixth major. This was the first time a major winner took home a seven-figure check. Only Bobby Jones had ever held all four majors at once. Tiger Woods was changing the rules of the game right before our eyes, he was a force of nature at this time.

Only three times in history has someone successfully defended the green jacket. This ruins the pageantry as the ceremonial fitting of the jacket from the previous winner to the newly crowned champion can’t take place. In 2002, Tiger didn’t care about tradition, he just wanted majors and this was his seventh.

With a share of the 54-hole lead, Woods put on the Sunday red and got the job done. The course had been ‘Tiger-proofed’ that year, except it hadn’t. The new length of the course played right into the hands of Woods as he sealed yet another major title.

Tiger was up against Chris DiMarco coming down the stretch. He reached the treacherous par 3 16th– Redbud. This is a hole that sees many hole-in-ones and near misses. That round Tiger pulled one left into the thick rough. Then the magic happened.

His pitch floated up and landed softly, there and then you could tell he liked it. The ball trickled down the slope and gathered speed seemingly thirsty and looking for the cup. As the ball got to the lip it slowed to a stop, the golf world held its collective breath. The Nike swoosh on the ball rotated at an impossibly slow speed…then disappeared. Cue huge celebrations and a sequence of golf footage that will never be forgotten. “In your life have you seen anything like that?!”

We obviously didn’t know it at the time but this would be Tiger’s fourth Masters title and it would be a long time before number five came along. The week had a tinge of sadness about it as it was the last time Jack Nicklaus would navigate the fairways of Augusta National as a competitor.

Chris DiMarco had been leading most of the week on that rain-delayed Masters. Tiger had been creeping up the leaderboard and as the third round was completed on Sunday morning he was in charge. The Sunday red went on and Tiger was in charge. His miraculous pitch at 16 gave him a two-shot lead with two to play. However, in a very un-Woods-like stretch, he bogeyed the last two holes to end up in a play-off with DiMarco. It took just one hole for Tiger to take care of business though. Another green jacket was in Tiger’s locker.

No-one likes to finish second. Tiger Woods is arguably the most competitive golfer of all time and so second hurts him even more. In the late 2000s, Tiger’s major wins had slowed but every year he arrived at Augusta he was seen as favourite. In 2007, he finished tied for second as Zach Johnson won with a score of +1. It was a brutal week where the course took no prisoners.

In 2008, spurred on by a nearly, Tiger would come up just short at second on his own to Trevor Immelman. The South African won wire-to-wire by three shots over Tiger. This was the closest Woods would get for many years.

The trials and tribulations of Woods are well-documented. His life will certainly make for a great Hollywood biopic. In 2013 things were starting to settle again at his point in Tiger’s career and even though injuries had hindered him, he was back at the top of the Masters leaderboard that week. On the par 5 15th, he had left himself the perfect wedge distance to set-up a short birdie putt.

Wearing bright yellow, Wood’s hit a stunning pitch that was closing in on the pin. The ball sailed through the air like a targeted missile then disaster struck. That beautiful wedge ricocheted off of the iconic yellow Masters flagstick, hit the green then backspin ripped it into the water. Disaster. In the moments that followed, Tiger took a controversial drop before finishing the hole. The wheels fell off and his comeback had to wait.

It is a bit odd to have a year where Tiger didn’t compete in an article about Tiger’s 15 most iconic Masters moments. However, it is worthy of a place as it made such a difference to the tournament. From 1995 until 2013, Tiger had really put his stamp on the Masters Tournament. Augusta National was his playground and it had been altered significantly because of Tiger’s brand of golf.

Back surgery meant that he was unfit to play and the world of golf worried that he would never really return. That year Bubba Watson took the green jacket with a magnificent playoff win over Louis Oosthuizen. The tournament just lacked something and that was Tiger Woods.

This was a tough time for Woods and he was, sadly, a shell of a man. The hero of world golf had injury after injury and his recovery wasn’t as fast as hoped. It was clear that he was desperate to play but his body would not allow it. When he did play, fans worried every time he missed the fairway that he would suffer more injury. 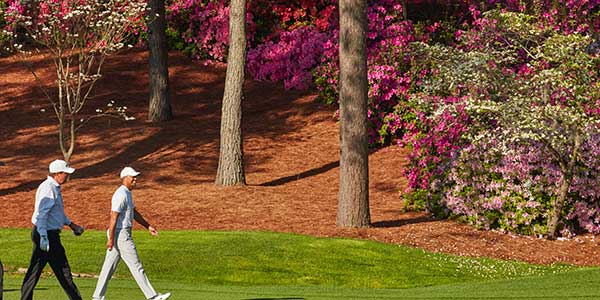 He finished tied for 17th in 2015. He just wasn’t his usual self, he did battle hard though. For Tiger fans this was hard to watch. The next two years he wouldn’t even play. The tournament had lost its iconic man in red and the fear was that he may never return. Things were bleak.

The mid-2010s were a rough period for Tiger Woods. Plagued by injuries and with the weight of an expectant golf world on his back, things just weren’t happening. 2018 was to be the year of yet another Tiger return and by now, many golf fans were wondering if it was even worth it any more. The 2018 Masters Tournament was Tiger’s first in three years.

This was not the week that Woods wanted, make no mistake about that. However, this was an important week as he made the cut and we had Tiger on a Masters weekend. His final round 69, was a battle for Woods, however, he gave us a glimpse that week that Tiger was re-emerging.

Ever seen a grown man cry? Well if you watched Masters Sunday in 2019 with a golf fan then you certainly will have. Having threatened that he was ready to win again with close shaves at the 2018 Open Championship and PGA Championships, the world of sport had high hopes that week.

The familiar yet somewhat alien site of Tiger Woods walking up the hill at Holly in his Sunday red was an emotional experience. He had kept us all in suspense but surely at the 12th hole that week he sealed the deal and just needed to get home. Watching him raise his hands in the air as a Masters champion for the fifth time was one of golf’s most special moments.

Tiger at The Masters

It should be clear as day how important Tiger Woods is to the Masters Championship. In modern golf, he is the king of Augusta and deservedly so. In 2019, we saw his return and many say that he is swinging the club even better this year. For 25 years, Tiger has been learning this beautiful course.