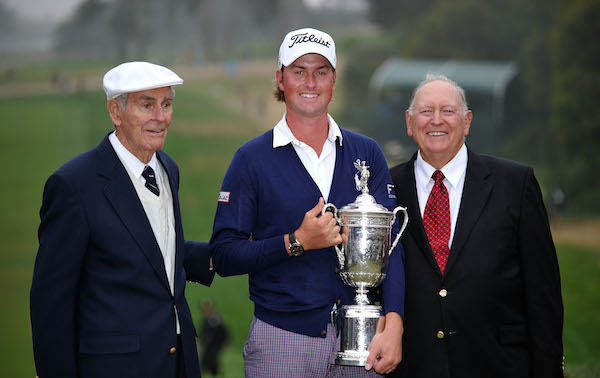 By Dan FoleyFebruary 8, 2015No Comments

Three-time major winner Billy Casper (above, right) has died at the age of 83, the US PGA Tour has announced.

The PGA Tour said on its website: “Billy Casper, one of the most prolific PGA TOUR winners in history and long considered among the sport’s finest putters, suffered a heart attack and died Saturday at his home in Springview, Utah. He was 83.”

According to the San Diego Union-Tribune, which quoted an email from Casper’s son Bob, Casper had spent five weeks after Thanksgiving in hospital battling pneumonia. He had since returned home.

Jack Nicklaus was among those to pay their tributes to San Diego native Casper.

The 75-year-old Nicklaus, who won a record 18 major golf titles in his career, said on his Facebook page: “I have said many times that during my career, when I looked up at a leaderboard, I wasn’t just looking to see where a (Arnold) Palmer or a (Gary) Player or a (Lee) Trevino was.

“I was also checking to see where Billy Casper was. Billy had tremendous confidence. He just believed in himself. You knew when you played against Billy Casper, Billy would not beat himself.

“You want to talk about someone who could perform under pressure, if you wanted someone to get up and-down for you, Billy Casper was your man. I think it is fair to say that Billy was probably under-rated by those who didn’t play against him. Those who did compete against him, knew how special he was.”

Quoted on the PGA Tour website, Player added: “I played a lot with Billy, and I always thought Billy had a wonderful short game. The way he managed the golf course – he had tremendous course management, which not a lot of people talk about.

“They talk about elongating, but that’s not what wins golf tournaments; it’s a great short game, the kinds of games we see with Tiger Woods and Phil Mickelson. They are not good drivers of the ball and yet, they’ve been No. 1 and No. 2. Billy had a great short game, managed the course well and he was always a thorough gentleman.”