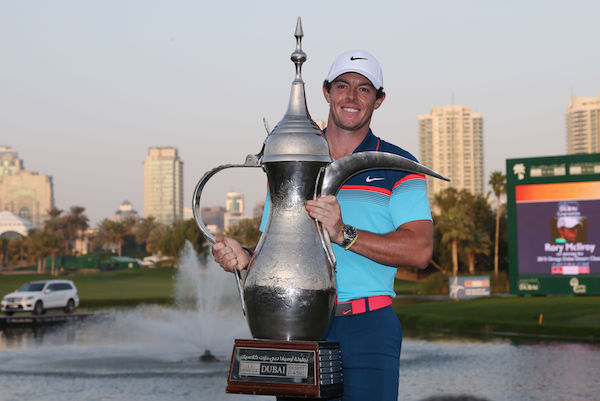 By Dan FoleyFebruary 2, 2015No Comments

Six years ago Rory McIlroy won his first professional title at the Dubai Desert Classic and yesterday he produced what he admitted was a solid rather than spectacular round to reclaim the trophy.

The Northern Irishman won by three shots ahead of Swede Alex Noren and carded a final round of 70 to secure his 10th European Tour title at the Emirates Golf Club.

“It is always great coming back here, it is nice to put my name on trophy once again,” he said at the trophy presentation. “I felt like I was finishing second every time I was teeing it up, so it was time for a change, obviously the only way I wanted to go was one better and thankfully I was able to do that today.

“I played very nicely all week. I did what I needed to do today to keep my nose in front and be able to win. I still get nervous, a little tentative, we’ve seen what can happen to big leads. I was making sure I wasn’t making any mistakes and to play a solid round.”

Noren played an impressive six-under final round of 65 saw him leap up the leaderboard from eighth to finish on 19 under par. He revealed he was delighted with his performance given he played just two events in 2014 due to tendinitis in both wrists.

“It was an amazing day, an amazing week,” Noren told Sky Sports. “I missed it so much it was really nice. I never, ever thought of winning. He (McIlroy) is playing so good, I was trying to get a nice finish. I just tried to keep making birdies and keep up with the other guys.”

Stephen Gallacher, who won the tournament both in 2013 and 2014, failed to replicate the form he showed on the first two days. Gallacher finished with four birdies in the back nine, but dropped shots on the first and 14th meant he finished third on 16 under.

England’s Andy Sullivan failed to finish strongly with a bogey on 15 bringing an end to his challenge, while a dropped shot on the last meant he finished in fourth, with a two-under final round of 70.

Shots of the Week from Dubai

Martin Kaymer was the day’s big mover as he closed with a final-round 64 to jump 30 places and finish level with Sullivan on 15 under par.

It wasn’t all plain sailing for McIlroy who only hit four fairways in regulation on the third day, with his superb play with the putter seeing him through. He needed his hot club to get through the first unscathed after another loose tee shot, while good work in the sand on the third saw him claim his first birdie of the day on three. The Northern Irishman dropped his first shot in two days on the seventh.

The group behind were closing, with Madsen moving back up the field with three birdies while Noren was also moving up the field after four-under-par scores in the opening seven.

Another sand save from McIlroy, this time on the 10th, saw him pick up another birdie before another poor approach, this time on 12, meant he had to work hard again to save par.

Sullivan birdied 13 and Madsen 14 to keep the pressure on the leader, while Lee Westwood, who began the day in third, was having a nightmare, with a bogey at six, a double bogey at nine and another dropped shot at 12 meaning the end of his challenge. He finished with a level-par 72 to finish ninth.

McIlroy’s approach on 13 was far more palatable, as he claimed another birdie to stretch his lead back to five.

Noren made birdies at 17 and 18 and a final round of 65 would have been well received after spending so long away from the sport late year.

Madsen bogeyed both 15 and 16 to end his challenge and with McIlroy consistently making pars, the title was his.