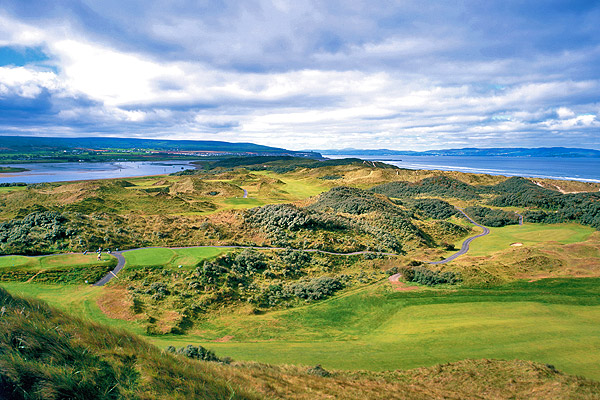 Golf in Ireland – Quotes from illustrious visitors throughout the years

Pound for pound; Ireland is one of the best golf destinations in the world, with top class links courses scattered all over its ruggedly beautiful coastline, and parkland beauties tucked away in the scenic spots like County Wicklow, also known as “The Garden of Ireland”, attracting droves of visiting golfers each and every year.

Of course it’s not just the golf courses that make an Ireland Golf Holiday so memorable…away from the course there are endless fascinating attractions and, perhaps most importantly, there’s some almighty craic to be had once the sun has set and the Guinness starts to flow.

Of course, you’ve probably heard this all before. So we thought we’d give you guys a snap shot of golf on The Emerald Isle, along with some of the thoughts of famous faces who have hit its fairways throughout the years…safe to say; golf in Ireland has plenty of avid fans!

[quote]”My favourite place to play golf is in Ireland. It’s the most beautiful country to play golf in. And when you come as a guest, you’re treated like a king.”[/quote]

[quote]”This is among my favorite places to play in Northern Ireland, one of the truly great links courses. The more you play it, the more you recognise it for the class place it is.”[/quote]

~ Rory McIlroy on Royal County Down

[quote]“I had such a great time in Ireland that I’ve been coming over ever since.”[/quote]

[quote]“Waterville possesses the best par-three holes I have ever encountered on the same golf course.”[/quote]

[quote]”The beautiful monster – one of the golfing wonders of the world.”[/quote]

[quote]“We get into the pub and get around a piano. I bring out my harmonica and the next thing you know it’s about 4am!”[/quote]

~ Payne Stewart on The Butler Arms Hotel in Waterville

[quote]“Some of my fondest memories of great golfing holes in the world include the number four and five holes at Lahinch.”[/quote]

There are fewer than 200 true links golf courses in the world – Ireland has 58 of them.

The 7th at The European Club in Wicklow is ranked among the 100 Best Holes in The World.

The green on the par 4 12th at The European Club is over 125 yards from front to back. Only in Ireland right?!

Since 2007 when Padraig Harrington won The Open at Carnoustie, the island of Ireland has produced more major championship wins than any other country barring the USA. Not bad with a combined (Republic of Ireland + Northern Ireland) population of just 6.3 million in comparison with America’s 318 million!

The Wild Atlantic Way (along which you’ll find courses such as Ballybunion, Tralee, Doonbeg, County Sligo and Ballyliffin) is the world’s longest coastal driving route.

According to Golf Digest, Ireland is home to 4 of the Top 100 Golf Courses in the World, with Lahinch (65), Royal Portrush (27), Portmarnock (25), and Royal Country Down, the world’s best course, all making the grade.

When the Irish Open visited Royal Portrush in 2012, it became the only event in European Tour history to sell out prior to play on all four days and set new European Tour attendance records in the process.

Founded in 1891, the Golfing Union of Ireland is the oldest golfing union in the world.

[quote]“I love Ballybunion. It’s perfectly Irish: beautiful, rough, and a lot like life — you get breaks you don’t deserve, both ways. You just have to keep swinging and know it will all even out.”[/quote]

[quote]“A man might think the game of golf originated here. It looks like a course laid out on land as it was in the 10th century. Ballybunion is the course on which many golf architects should live and play on before they build golf courses.”[/quote]

~ Rickie Fowler on Royal County Down

[quote]”There are no tricks or nasty surprises, only an honest, albeit searching, test of shot-making skills.”[/quote]

[quote]“Anyone who has a love of golf and scenic beauty should make a point of playing here, it’s as simple as that.”[/quote]