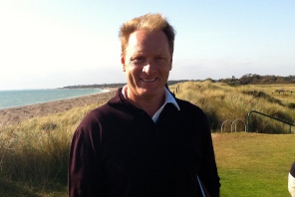 From fresh faced beginners to seasoned veterans the game of golf is a game enjoyed and loved by millions of people across the globe. Recently Your Golf Travel has got together with some big hitters from the golfing world to pick their brains about the courses they love, great golfing moments from the professional game and why they love the game. We all love to talk about the game in the 19th hole after a day on the fairways and here is what leading professionals in the golf industry had to say:

Established in 1994 Golf News is the leading golf newspaper in the UK. With 38,000 hard copies distributed to over 500 golf clubs every month as well as also reaching 25,000 online subscribers.

How often do you get to play golf these days?

What inspired you to take up the sport?

My Granddad played golf and took me for my first ever round at the age of 16, it was at a nine hole course in Surrey called Dunsfold Aerodrome Golf Club, the round was filled with some air shots and a couple of sweet ones which got me hooked on the game! Unfortunately this course is now closed. Owned by British Aerospace, the runway is now used for Top Gear, so at least while watching every Sunday evening I’m reminded of my first ever round and how I got to play the game!

Where is your home club and why do you enjoy playing there?

I play at the course just North of Brighton and Hove called The Dyke, it a lovely course with great views overlooking the Channel.

What is the best golf course you have ever played?

That’s a tough question, I’ve been very lucky to have played a number of great courses, the stand out course’s are the Ocean Course at Kiawah Island, Waterville Golf Links in Ireland, Valderrama, Royal Birkdale, Fancourt Links, and many more! If I had to pick one memorable course it would have to be the Tom Fazio designed Shadow Creek in Las Vegas. Back in the day it was almost impossible to get on and was owned by Steve Wynn of Las Vegas hotel fame. It only had four tee times a day and when I played Michael Jordan and President George Bush were in the other groups! The 17th Par 3 is probably the best par three’s I’ve ever played. Apparently Michael Jackson used to visit the hole and admire its beauty for hours!

What is your favourite moment from golf’s rich history?

I think it is Tiger Woods winning his first major at Augusta National and the way he did it. I think everybody connected to golf knew the sport was entering a new and exciting era following that showing at The Masters. 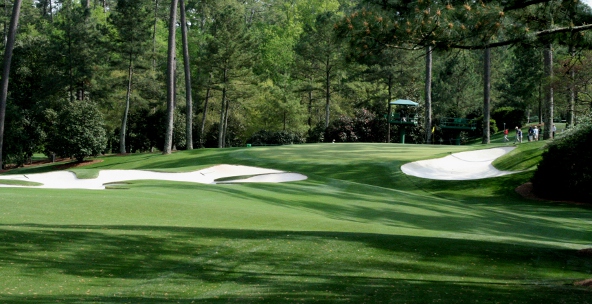 Augusta National – Where Tiger Woods burst onto the scene at the 1997 Masters tournament. Woods would go on to win by a staggering 12 shots!

Who would complete your dream fourball?

My mates Dave, Graham and Paul nobody could top playing with my three mates, there’s never a dull moment.

If you had the keys to a private jet and could choose to play any golf course in the world; where would you go?

California and play Cypress Point GC next to Pebble Beach. It’s an extremely difficult course to get on to play with only about 200 members and it just looks a thing of beauty!

If you worked for Your Golf Travel, where would you recommend for people to go for a golf holiday?

For value for money and quality of the courses, you cannot beat the Algarve, only two and half hours away and some of the best courses to play in Europe and always in great condition. I’ve been going there for years and never get bored of playing down there.

What is the best golf related advice you have ever received?

I was playing in a Virgin Charity Golf Day at Wildwood in Surrey a couple of years ago and the ex Ryder Cup player Paul Way was on the putting green, he came over and changed my putting grip completely and I haven’t looked back since, I remember holing everything that Summer!

What piece of golfing equipment or golfing gadget could you not live without?

My Odyssey Backstryke putter and Ping G15 Driver…I’d be lost without them!

What’s the funniest thing you have witnessed on a golf course?

As a regular party piece I used to carry a rubber snake in my golf bag. One day while playing at Worplesdon in Surrey with French Golfer Jean Van De Velde I decided to have a laugh and get it out of the heather while playing the 18th. Little did I know, Jean had a bad phobia of snakes and when he saw it his face turned white and he tried hitting it while it was still on the end of my club! I then ran after him, he panicked, left his clubs and starting running towards the clubhouse calling me all kinds of names! We ended up having a great laugh about it the bar after our round!

Matt with the famous Claret Jug from the Open Championship