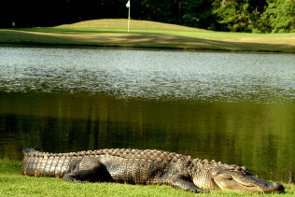 Here is our collection of the world’s most extreme hazards, both man-made and natural, that can spell disaster for your score should you fail to avoid them.

Many a weekend warrior may as well pick the ball up on any hole where they happen to find a bunker, such are the struggles many amateurs have with even escaping their sandy grave, let alone hitting close enough to rescue a sandy par.

The Himalayas Bunker at Royal St Georges may not have troubled the pros during the 2011 Open Championship but when the weekend warriors take to the course it readies itself for some serious score bashing!

This is particularly true in pot bunkers which are typically found on the classic links courses of Ireland and Scotland but there is one bunker that resides in England that is truly terrifying! Royal St Georges’ already testing 495 yard par 4 4th is home to the Himalayas Bunker which acts as a visual barrier to the sanctity of the fairway.

This is no ordinary bunker by the way. Measuring in at 40 feet deep and 25 feet across, any drive that is sufficiently poor to end up in here will be severely punished…sideways escapes are common place as progressing your ball any closer to the green is nigh on impossible!

When you head to the great links courses of the UK & Ireland you are bound to hit the odd stray tee shot into the longer cuts of rough; cuts of rough that, if you’re are lucky enough to find your ball, will leave you doing nothing more than hacking your ball back into play.

Courses such as Turnberry, Royal Porthcawl and Saunton have patches of rough that would be enough to turn any golfer’s knees to jelly but head to Royal North Devon, England’s oldest golf course, and you will have to contend with the Great Sea Rushes.

Towards the back end of the front nine and into the start of the back nine, the Great Sea Rushes at Royal North Devon really come into play. Great swathes of 6 foot high grass-like plants, with what seem like steel tipped spikes spread out over the rugged links land as it starts to move away from the shore and into the natural wetlands of the Westward Ho! If your ball strays into the rushes then its best to reload…even if you find your ball you may lose an eye bending down to retrieve it…these things really are vicious!

This hazard is an integral part of arguably the most iconic hole on the most famous golf course of them all, the St Andrews Old Course. While it may not be as grand as the Himalayas Bunker at royal St Georges, the Road Hole bunker which guards the front of the 17th green on the Old Course is just as punishing to your score should you find it with an errant approach.

The Road Hole bunker can get the better of even the best players in the world…Huey Lewis figured out the best way to play it though!

The Road Hole Bunker is most certainly of the pot variety and its riveted face is devilishly steep with balls often coming to rest just at the base, making an escape onto the green and a putt for a par an impossible task. Not only that but those who pluck up enough courage to try and hit the green run the risk of catching too much of the ball, sending it sailing towards the concrete road and stone wall that sits just long of the green. While some players who have done just this have rebounded of the wall and onto the green in spectacular fashion – think Miguel Angel Jimenez – the majority are faced with a nigh on impossible up and down for a bogey.

While water hazards are common place on many a modern golf course there are few that can boast the Pacific Ocean as a genuine hazard on the course. Pebble Beach can though as a number of holes skirt the edges of the planets largest body of water, often forcing players to send their balls soaring over the surf before returning to the safety of terra firma.

The view from the tee on the famous par 5 18th at Pebble Beach.

While the Pacific certainly comes into play on the famous par 5 6th and short par 3 7th, it is at the par 5 18th where it really becomes part of the course. This par 5 is reachable in two for longer hitters but they will have to hug the shoreline, keeping their balls close to danger as they negotiate this sweeping hole that is only separated from the ocean by a wall of rocks all the way from tee to green.

When the tide is in players may even get a cooling blast of spray from the waves that crash into the bay which must act as a bit of a distraction when lining up a four footer to win at the last! The question remains on the tee though…how much of the world’s largest water hazard do we bite off?

Not to be outdone, the North Sea also has its say on the scores of golfers playing near the water’s edge. While some if the USA’s most famous courses such as Bandon Dunes, Cypress Point and of course Pebble Beach skirt the edges of the mighty Pacific, there are plenty, particularly in the UK & Ireland where the colder, stormier waters of The North Sea come into play.

Don’t expect the North Sea to be so calm during your round at Kingsbarns!

Kingsbarns in Scotland boasts a hole very similar to that of the famous oar 5 18th at Pebble Beach, with the Atlantic taking the place of the Pacific and running the entire length of the hole but it is the par 3 15th at this magnificent Scottish Links that really forces players to take on the choppy, intimidating waters of The North Sea. Tee shots that have any designs on finishing near the pin will have to be played out over a little bay where the waves crash into the rocky shoreline. Add the ever present wind into the equation and you have a real knee-knocking test!

While there are many golf courses that feature lakes that wait to send golf balls to a watery grave, few can match the impact that Lake Coeur d’Alene could potentially have on your score. Coeur d’Alene, situated in North Idaho, boasts a truly spectacular golf course that is highlighted by the incredible par 3 14th which boasts the only true island green in the world. 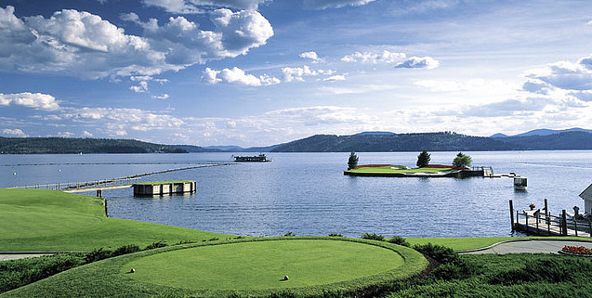 Lake Coeur d’Alene plays a key role in the golf course at this superb resort…I wouldn’t be too confindent of going home with any golf balls if the green keepers had moved the green out to 230 yards on my day of arrival!

Yes that’s right…the green floats and can be moved via a pulley system from 110 yards to a whopping 230 yards from the safety of the shore. Golfers, who get dropped to the green by a boat, simply have to find the target with their tee shots…anything else will result in reloading again and again until the green is found!

The words “just put me down for a 10” must have been muttered more than once on the tee of this little trickster! Coeur d’Alene is without doubt a unique experience to be had on your next American Golf Holiday.

Having included a lake in the list already you must forgive me for adding yet another…to be fair though this one is home to a number of critters that make this one of the most extreme hazards on all of golf.

Here in the UK the worst thing me may have to deal with on the course might be a disgruntled badger but down under sharks make their way onto the golf course!

Following a flash flood near the Carbrook Golf Club in Australia a number of Bull Sharks…yes…Bull Sharks made their way into a lake on the course and when the flood waters subsided they became an integral part of the course…not a movable obstruction should your ball come to rest in ones belly!

Needless to say there won’t be any golfers doing a Van de Velde should their golf ball come to rest semi submerged on the water’s edge!

The Cliffs of Hawke’s Bay

The Pacific Ocean does come into play when you are playing the awe-inspiring Cape Kidnappers in New Zealand but it is the 400 foot cliffs that have a more immediate effect on the way you play the course!

The cliffs on which Cape Kidnappers resides certainly provide drama. A shot missing the fairway by a foot might end up 400 feet below the golf course in the waves rolling into Hawke’s Bay.

Cape Kidnappers is perched high on the cliffs that overlook Hawke’s Bay and throughout the back nine holes are balanced on fingers of land that jut out into the bay, leaving any shots missed left or right falling for an eternity towards the waves that roll into Hawke’s Bay.

We would advise you stay closer to the middle of the fairway than the edge of the cliffs here!

Sharks may be scary enough for golfers but it is the alligators that are commonly found on the golf courses of Florida that should worry golfers more…after all…they can leave the murky depths of the lakes on courses like the Blue Monster at Doral and the Champion Course at the PGA National Resort and invade the fairways should they feel so inclined!

Golfers playing the Blue Monster might come across the odd monster of their own!

Balls that find their way into such water hazards in Florida may just have to be consigned to the pages of history!

Can you think of any other extreme golf hazards?