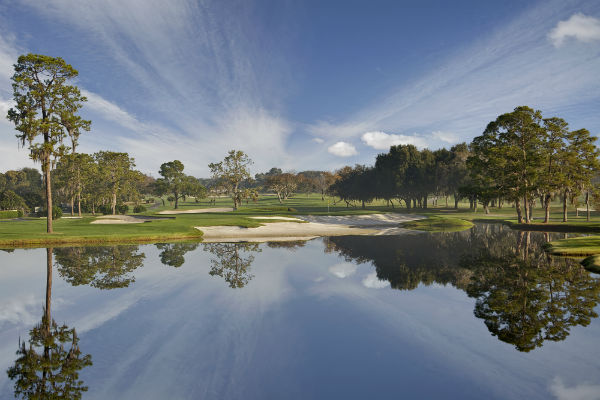 It is Arnold’s Tournament

On the 25th of September 2016, the golfing world went into mourning following the news that Arnold Palmer; one of golf’s best players and biggest advocates had passed away. Arnold Palmer left a legacy both on the course with 7 major titles to his name and off the course with his charity Arnie’s Army which helps children and institutions all over the world. Throughout the week his legacy is sure to be seen all over the course, none more so than at the 10th hole where a new statue of him has been erected in his memory. Arnold Palmers love affair with Bay Hill Club & Lodge started in 1965 following an exhibition match against Jack Nicklaus, after the round he went on to say it is “the best course in Florida”. Palmer then went onto buy Bay Hill in 1974 and by 1979 he had transformed it into a club fit to make its debut on the PGA Tour when it held the Florida Citrus Open Invitational. Since then the invitational has continued to be played at Bay Hill year in year out and in 2007, the tournament was finally named the Arnold Palmer Invitational and is a one of the biggest events on the player’s calendar excluding Major Championships.

The tournament was first played at Rio Pinar Golf Club in 1966 when it was operating under the name of ‘Florida Citrus Open Invitational’ and it was held here for 13 years before it moved to Bay Hill Club & Lodge where it has been held since 1979. Throughout the years the event has operated under many different title sponsors till 2007 when it was named the Arnold Palmer Invitational. The tournament has always featured the game’s biggest names with players such as Lee Trevino, Ernie Els and Arnold Palmer himself winning the tournament prior to the turn of the Millennium. However, since the year 2000 Tiger Woods has dominated this tournament with a record 8 wins to his name and in 2003 Tiger set the record for the largest winning margin when he blew apart the field and won by 11 strokes. However, Tiger’s last win in the tournament came in 2013 and with back to back wins coming from Matt Ever in 2014 and 2015 he is one to look out for heading into this week.

The tournament is one of only five tournaments that the PGA Tour has granted invitational status meaning that the field is decided in a different way other PGA Tour events. Players qualify for the event as followed:

The headlines a week ago regarding this year’s field were dominated by the withdrawal of Tiger Woods who has been a victor at Bay Hill 8 times and many pegged this tournament as the one he would return to play in. However, despite his absence the field is still littered with former world number 1s, Major Champions and incredible talent with players such as Rory McIlroy and Jason Day looking to continue a solid start to their season as they go in search of their first win of the year. Round 1 this week marks exactly 3 weeks till the Masters and with this in mind current champion Danny Willett will be looking to find some form at Bay Hill as he hopes to do defy the odds yet again and become only the fourth player in history to win back to back Augusta. Tommy Fleetwood should also be in contention this week following a second place finish at the WGC in Mexico and win earlier in the year at Abu Dhabi Golf Club, the Englishman is no stranger to competing amongst the world’s best.

Who are our YGT ‘pundits’ backing for this week?

Despite liking the look of Rory McIlroy who’s in a decent vein of form, as well as Henrik Stenson who’s also playing well and heads to Bay Hill with finishes of T8, T5, 2nd & T3 since 2013 (for some reason Henrik just doesn’t get over the finishing line much in the USA despite his consistent brilliance), I’m going a little left field this week and will be picking Wesley Bryan at 45/1.

You may recognise Bryan as one half of the social media duo that is the Bryan Brothers but since taking a break from repeating subtle varieties of the the same trick shot over and over to, to be fair to them rapturous applause on social media, Wesley has earned his PGA Tour card and come on really strong in recent weeks after a sticky start to life on tour.

After a bunch of nondescript finishes and a few missed cuts, Bryan has flourished recently and finished T4 at Riviera, T4 at PGA National and T7 last time out at The Valspar Championship. If he keeps his putter going I’ll be happy to see him get into the Top 5 and bag me some cash on an each way place.

McIlroy is yet to finish outside the Top 10 this season and is competing in every tournament he is playing so I’m certain he’ll be up the top of the leaderboard again this week. Despite his long time off from injury, he came back with a T7 finish at the WGC Mexico just a couple of weeks ago and had he not slowed down on Saturday & Sunday, he would have finished even higher. He was probably lacking competition rounds but now he’s got this under his belt and has showed golf rounds of 65 this season, he’ll be looking for his first win of the season. After all, he lives for the big Tournaments and the Arnold Palmer Invitational is certainly one he wants to win.

Two weeks on the spin, The Ice Man, receives my pick. Whilst he didn’t claim a win at Innisbrook, his tie for 7th was good enough to suggest he’s not far away from a win that’d put him right amongst the favourites to claim the Green Jacket for the Major season opener at The Masters. Florida is a pretty comfortable place for the man from Sweden with his house a short distance away at Lake Nona Golf Club so it won’t be a huge surprise to see Stenson add to his trophy collection this week.

Hideki Matsuyama has been on an incredible run of form so far this year with 2 wins already to his name and 2 second places, the number 4 in the world sits at 2nd in the Fedex Cup rankings. Matsuyama will be looking to have a strong week at Bay Hill and following a disappointing week at the WGC in Mexico by his standards he will be looking to bounce back strong before heading into the years first major in a few weeks time. With only one miss cut so far this year and 4 top ten finishes, you would be in with a good chance of making money when it comes to betting on Hideki to well this week.

Tyrrell has had a fantastic start to the 2017 season, competing on both sides of the Atlantic including the desert swing on the European Tour and the Florida Swing stateside. He finished inside the top 10 at the Mexico World Golf Championship and at the Dubai Desert Classic in February, he shot 14 under to get inside the top 3. An incredible February and start to March for Tyrell, so let’s hope his fine form will continue this week at Bay Hill and that he can confirm a spot at the US Masters in early April.