As one of sport’s most watched events, The Ryder Cup, draws fans, both in-person and on television sets across the globe.

Taking place on rotation in Europe and The USA, the event draws a passionate crowd of golf fans to watch the spectacle unfold. With 45,000 spectators attending each day, the atmosphere is electric and the golf across the three days is one that matches that level time and time again.

Host courses of The Ryder Cup in recent years have been selected for their excellent transport links and viewing for fans. Whether that is The Twenty Ten Course at Celtic Manor with its rolling hills in the Usk Valley or The 2021 Ryder Cup at Whistling Straits courtesy of the huge sand dunes that Pete Dye sculpted to create a links-esq golf course in Wisconsin.

With practice starting earlier in the week, there are opportunities to see the teams warm-up ahead of the matches with pairings beginning to form and tweaks made to ensure they get the order right ahead of the foursome and fourball matches on Friday and Saturday before the singles on Sunday.

You know that feeling when you’re looking forward to something for ages, and it delivers on all fronts?

That was the Ryder Cup in 2018 at Le Golf National.

With Tiger Woods winning the week before, Justin Rose clinching the FedEx Cup and a whole season of high quality, exciting tournaments, the stage was set for an unforgettable showdown in Paris.

Watching with the locals in and around Paris during Friday and Saturday, it was Sunday where we got into the action and it was electric. We made sure to get in early, spend some money in the official shop and then head to the grandstand at the first tee, turns out that was a brilliant decision.

I can confirm, this doesn’t get old. #ThunderClap #RyderCup #TeamEurope ??? pic.twitter.com/5O4oQYWIGC

The atmosphere built up until the first tee time, with the likes of José María Olazábal hyping up the crowds and the sun beaming down on Le Golf National, giving us the perfect Ryder Cup experience.

Safe to say everyone enjoyed McIlroy at the tee #RyderCup pic.twitter.com/LnncfWu4Iy

From there we headed to the 16th, a hole which has been popular all week and when it came down to it, was the defining hole for the tournament.

The crowds around the par-3 green were huge and the atmosphere was indescribable; the action was so pulsating that you didn’t know where to look – At the green? The tee? Or the huge screen behind us keeping us up to date with the other results.

Quite a tidy spot on 16 for @YGTRory and co @legolfnational for the culmination of the #RyderCup – Bit too tight at the mo though. ?? pic.twitter.com/uXso2EQGks

In the end our spot to the right of the green was perfect and we can count ourselves extremely lucky that not only were we at the course for Europe regaining the Ryder Cup, but at the hole as well.

The moment it came home #RyderCup

So…I’m not trying to brag here. But I’ve been to The Masters 3 times. I’ve spent the last 3 and a bit years (my first Masters was in 2015 when Jordan Spieth ran riot) waxing lyrical about it to my friends and family who have a common interest in golf. And I have not been exaggerating in saying that Augusta offers the best live viewing experience golf has to offer.

However, despite how special it is walking the world’s most famous golf course, seeing Tiger make eagle, birdie, eagle in the three holes I followed him for, watching Nicklaus, Watson and Player playing the Par 3 Tournament (the memories are many ; it was all trumped in one EPIC day at Le Golf National on Sunday.

You see more golf in “first person” at The Masters and that’s part of what makes it such a special tournament to attend. But that’s where it ends. The Ryder Cup wins in every other department. 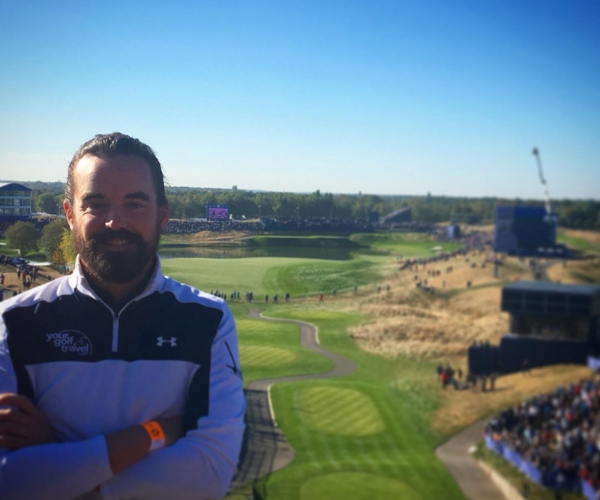 It’s probably easy for me to say this while still riding high on a wave of Team Europe euphoria, as well as some fairly strong pain killers and a fair bit of water this morning, but it was just awesome…I think even if America’s brief hint of a Sunday comeback actually played out the way they wanted it to, I’d still have loved the experience. The atmosphere is something I wish I could bottle up for use when I need an adrenaline hit.

From arriving at the 1st Tee Grandstand 3 hours before the 1st match was due to tee off, to being about 15 feet from Phil Mickelson’s splash ball that handed the cup back to Europe, my day at The Ryder Cup was so far ahead of what I expected it to be in terms of entertainment, emotion and experience, it was tantamount to watching Usain Bolt setting his first 100m world record, easing off after 60 meters, looking back at his closest competitor (The Masters) and beating his chest as he strolled to victory.

It was THAT good.

I would imagine the fact that this was a “home” Ryder Cup made it all the more special…but I’d guess even the American fans – once the heartache of yet another beating from the “lesser” team on paper has subsided – had an awesome week in Paris. I’ll be dining out on this one for a while and can’t wait to be that annoying prat at my home golf club, shouting “I WAS THERE” with a smug grin on my face every time someone mentions Paris 2018.

Based on experiences at this event, it certainly makes sense to have The Ryder Cup right at the top of any bucket list.

If you want to join Your Golf Travel at Marco Simone in 2023 then why not register your interest for 2023 now?

How many teams are in the Ryder Cup?

What is the format of the Ryder Cup?

The Ryder Cup involves 3 days of match play competitions between players selected from two teams of twelve. The first 2 days are four fourball matches in the morning and four foursomes matches in the afternoon. On Sunday, there are 12 singles matches, when all team members play.