Your Golf Travel in support of Help for Heroes 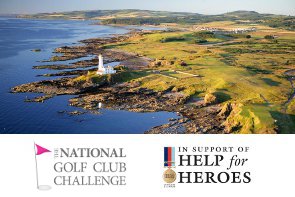 Your Golf Travel is proud to announce that we are the headline sponsor for the grand final of the 2011 Volvo National Golf Club Challenge charity event that is geared towards providing support to Help for Heroes.

Thousands of golfers, from golf clubs around the UK have competed in the Volvo National Golf Club Challenge. Each club hosted their own Help for Heroes charity fundraiser in June, while simultaneously competing against each other to win the right to attend the final to compete for some fantastic golf prizes, and to be crowned the 2011 Volvo National Golf Club Champions.

The Volvo National Golf Club Challenge will be held at the fantastic Turnberry on the 25th and 26th of October 2011. Four men’s teams will from qualifying events from across the UK will go head to head in the fight to become Britain’s champion club with the winners getting their hands on the prestigious Lee Westwood Cup. The final will also be hotly contested by four ladies teams who will also be doing battle for the right to call themselves ladies national champions and for some fantastic golf prizes.

The Turnberry Resort is one of the best and most historic golf venues in the world so all contestants are guaranteed an amazing day of golf regardless of how they score! The Ailsa Course has hosted the Open no less than four times and indeed played host to perhaps the greatest major championship ever, the 1977 Open which saw Tom Watson and Jack Nicklaus slug it out in the ‘Duel in the Sun’.

Help for Heroes is an extremely worthy cause that aims to provide support for the wounded servicemen and women returning from Afghanistan and Iraq. These are ordinary people doing extraordinary things for their country and they deserve our support for the sacrifices they have made for us. We may not be able to prevent our soldiers from being wounded, but together we can help them get better.