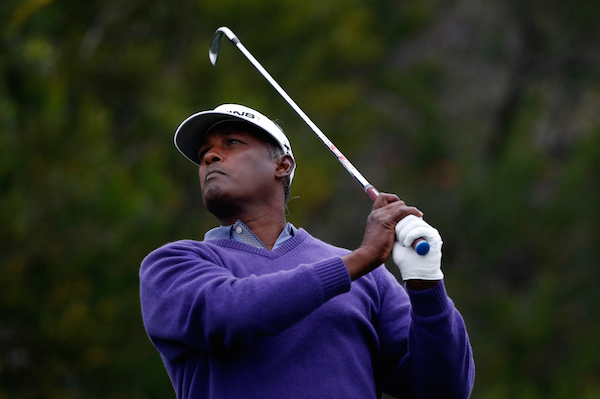 By Dan FoleyFebruary 20, 2015No Comments

South African Retief Goosen and Fijian Vijay Singh were amongst six players with a share of the lead on day one of the Northern Trust Open.

Both players will be looking to end significant streaks without a title. Goosen, who last won a title five years ago, and Singh, who is in the midst of a six-year drought, shot 66 a the Riviera Country Club on Thursday.

Joining them with that first round score were American quartet Nick Watney, James Hahn, Daniel Summerhays and Derek Fathauer.

MORE: WHY THE WINNER OF THE NORTHERN OPEN TRUST COULD GO ON TO WIN THE MASTERS

Two-times US Open winner Goosen, who went round with Singh on Thursday, hit seven birdies but may regret back-to-back bogeys on the 11th and 12th holes.

“It was nice to play with Vijay,” the 46-year-old told the PGA Tour website. “He played very solid, too, and he putted really good. So it’s nice that the two old boys played so well.”

Singh, who has three major titles to his name, bogeyed the third hole but hit four of his six birdies on a blemish-free back nine to be in contention.

The 51-year-old spoke of his relief at being finally free of injury and able to enjoy his golf, saying: “I’m finally not hurting as much as I did the last five years.

“That’s a big part of playing good golf. You’re not hurting, you can go out and play and you’re comfortable. Right now, nothing hurts. The golf swing feels good, and I’m happy to be playing.”

Mexican Carlos Ortiz sits one shot behind the leading group, while Justin Thomas spearheads a four-strong group one further behind on three under.

Englishman Paul Casey is four shots off the leaders after carding a one under 70.