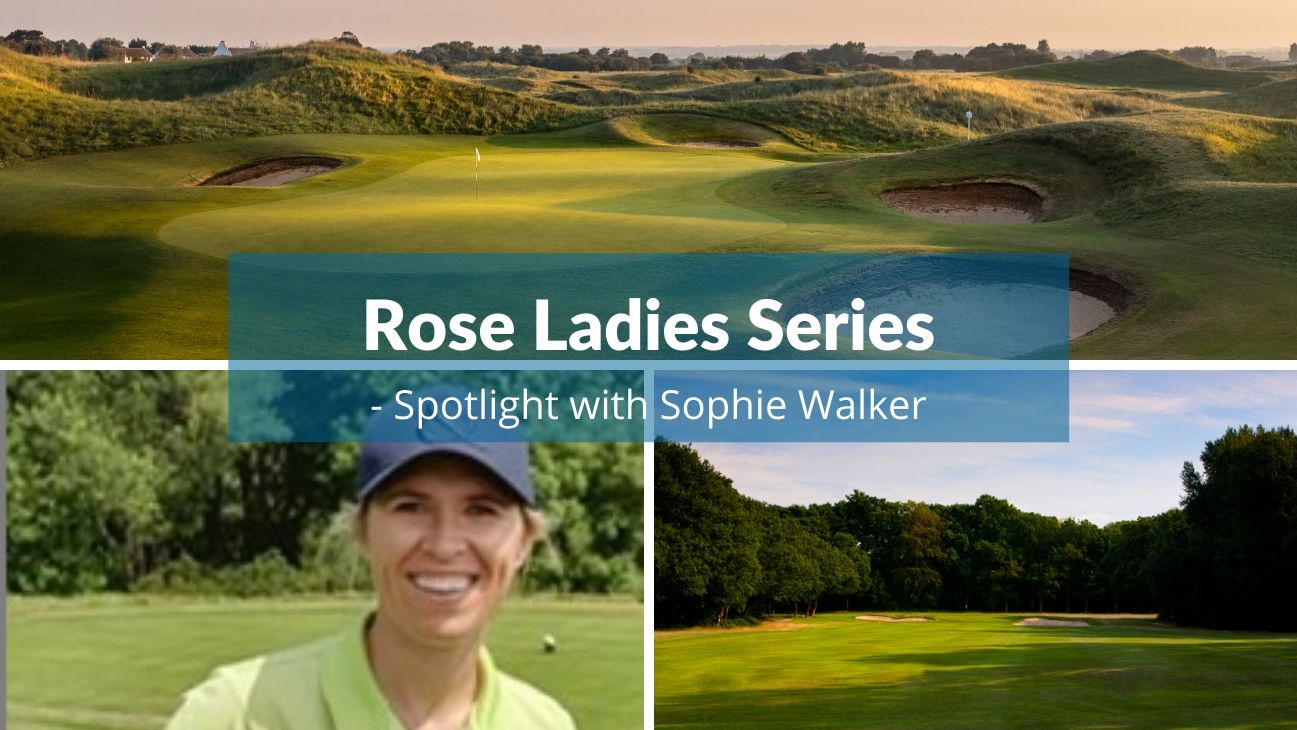 What is the Rose Ladies Series?

Women’s professional golf here in the UK was on a bit of a back foot, with tournaments (Ladies European Tour) not due to re-start until August. With this in mind, Liz Young (LET player) put together a one-day event at Brokenhurst Manor in the New Forest. Each player would pay into the pot which would become the prize fund.

The tournament was lacking support and sponsorship. Justin Rose and his wife Kate heard about it and wanted to bring it into the spotlight, to help highlight women’s golf. He turned the event into the ‘Rose Ladies Series’, with 9 courses in total now hosting one-day tournaments. Rose is also offering a prize fund and helped bring American Golf on an official sponsor.

We chatted to former Ladies European Tour player, now coach/presenter, Sophie Walker to get the lowdown on the events.

“There are 48 members of the LET that are English and its embarrassing going on tour.  Spain has a couple of events, Australia have a few events, England had nothing. Yet look at all the Solheim Cup Players we have.”

“It’s all that the women want. They practice as hard as the men, their travel expenses cost as much as the men, they’ve got that competitive edge. We do exactly the same, except the men get more opportunity to play.”

Which courses will be hosting the Rose Ladies Series and when

Proud to be taking the @RoseLadiesGolf series to my home club @NorthHantsGC. A course that @JustinRose99 and myself first met at when we were just 10 years old. pic.twitter.com/TzPnB53VpO

As you can see from the list of courses above, many of the host venues are based in Hampshire, where Rose played county golf.

“Justin is from Hampshire and I can imagine him thinking about all the courses he used to play. He had the course record at Brokenhurst, he played a lot of these great courses as an amateur. He was probably thinking ‘I remember Bearwood Lakes and how good Moor Park was’. Him getting behind it with Kate was significant, as Liz was struggling to get sponsorship for even one event”

The events are set to be covered by Sky Sports and the news of the venues to host the Grand Final have been announced as North Hants and The Berkshire with the final 36 (+ties) heading to Wentworth. The Rose Ladies Series is the first ever professional Women’s event to be hosted at Wentworth’s West Course! The field for the Grand Final will be made up of 51 players by Order of Merit. To be eligible to play in the final, the 51 players must have competed in four of the events in the series.

Charley Hull and Liz Young both finished level par, taking the game to a play-off where Hull sunk a 15-foot putt for birdie to clinch the win.

Despite earning herself a 2 stroke penalty for hitting the wrong ball on the 11th, Meghan finished three-under par to win the event with a two shot lead over Liz Young.

It was an exciting finish for Gemma Dryburgh as she claimed victory with a one-shot victory over Georgia Hall and Cara Gainer!

Gemma wins 2 weeks running and made history by being the first female professional to win at Royal St George’s! It was a tense few holes for Dryburgh, Hull and Hall. It looked certain to go to a playoff between Hull and Dryburgh but as Gemma sank her putt, Charley missed crowning Gemma the champion.

Gabs claimed her second professional win at the 5th event in the Rose Ladies Series, winning with a 1 shot lead to finish -2 under par.

If reading about the game we all love has got you itching for a round, let us help you get something organised.