It’s Major week once again, with the PGA Championship having moved from a September scheduling to May. Along with Tiger’s famous win last month at The Masters, do you think there is a renewed excitement in this week’s event?

Well, it’s certainly exciting because of what happened at The Masters. I‘m not sure anybody expected him to put in such a quality performance; the way that he won it was special and keeps the dream alive for him to break Jack’s record of 18 Majors.

Of course, we know it’s not easy with the wealth of talent in the players around him. Looking at the field, there are 25 guys we wouldn’t be surprised to see win this weekend, but he’s going back to the venue where he claimed victory in the US Open in 2002 so it’s familiar territory.

You can sense the excitement because people expect him to contend. Whether or not he does it is another thing but we all expect him to be there or thereabouts.

The PGA Championship is in May for the first time ever. Last week when we spoke, you mentioned it might have had an effect on the field of the British Masters, what are your thoughts on the schedule change, a week later?

I thought last week was amazing. The crowds were brilliant but I think that was more testament to where we were in the World and what golf means to people in the North West of England than anything else. We all know it was hard to get the field because of the USPGA.

At the end of the year, we’ll have to look back and think about it. I think it’s really exciting right now because it’s one after another, isn’t it? We’ll take three deep breaths and we’ll be back at the US Open in June and then The Open in July!

Although that does mean there will no Major Championship golf between July and April next year, which is a long time.

It’s also changed things for the pro’s, it means things are more cluttered. Take Tiger, for example, his last start was a Major Championship and his next start will be a Major Championship because it doesn’t make sense, schedule-wise, for him to play in the gaps. I’ll reserve judgement until the end of the year but I will say it’s very exciting right now.

The PGA Championship is at Bethpage this week and the Black Course has quite a reputation for it’s a difficulty. We’ve all seen the famous plaque warning golfers. What makes it so hard?

It’s actually one of the few venues I didn’t get to play in the US Open but my wife has played it!

Looking around the course this week, you can see the difficulty lies throughout. It’s not that the greens are that sloped, but it’s a difficult driving golf course due to its length so if you do miss the fairways, you’re going to struggle to find the green. This week especially it’s going to play every inch of its length because it’s pretty cold out here.

It’s also quite undulating with a lot of rolling terrain and hidden ups and downs, so again, if you’re out of position off the tee, it’s going to make it very difficult to find your way around. 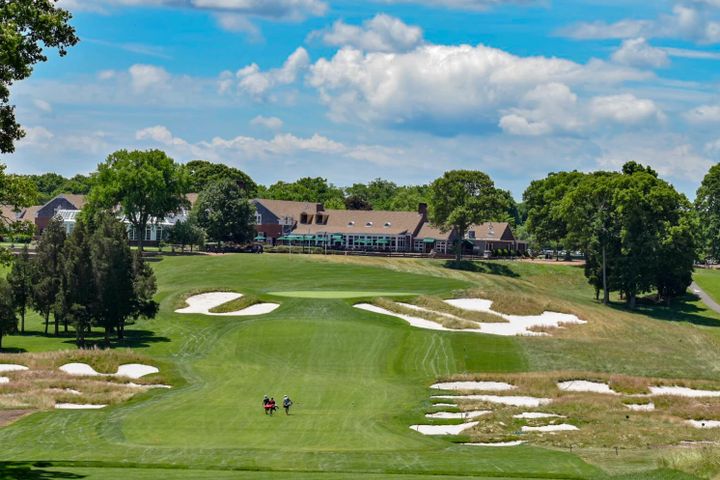 What will it take to shoot a low score?

The low scorers this week will be bringing a long, straight drive. Whoever does that can break the back of the course, but remember the scores at the 2002 US Open; only Tiger Woods managed to break par over four rounds.

Either way, it’s going to be a great test for a superb field. There are a few players who fit the bill, one of them being Brooks Koepka. He has a lot of confidence to hit the ball long and straight and has played very well in the last few Majors. His iron play is strong, he putts well, he chips well and he’s absolutely fearless. He just doesn’t back down and will certainly be looking to spoil the Tiger party, that’s for sure.

For me, there are a few players that stand out who can drive the ball; Rory McIlroy and Dustin Johnson will always stand out in that category. There’s also a great opportunity for Jordan Spieth to complete the Grand Slam which would be an unbelievable story because he’s had such a torrid time recently. Looking back at results over the past year, you simply can’t write anybody off.

The course is due to host the Ryder Cup in 2024. How do you think it will fare as a Ryder Cup venue?

It won’t be shy of noise, that’s for sure. The crowds flock out in the New York area, whether it’s Shinnecock or Winged Foot or indeed, Bethpage and they are very vocal.

They’re going to be rooting for their team, but of course, that means they’re going to be rooting against the other team which can make for quite a unique atmosphere when compared to other golf events. That’s not necessarily a bad thing as you saw at Le Golf National, the support for Team Europe was incredible and that’s something that the opposing team has to contend with every two years.

I’m all for an engaged and energetic atmosphere but I’m hopeful that there is a certain level of decorum maintained because there are certain things in golf we just don’t do. I’m wary that it could be brought to a whole new level because it’s going to be such an amazing event.

Which tees would you recommend for someone booking through Your Golf Travel? Surely, you’ve got to be some golfer to go off the blacks?

One of the wonderful things about our sport and the Black Course is that it’s open to everybody and inclusive so you can go and experience what the pro’s experience.

People often get to the Black Course and fancy pitting their wits against such a challenging course but by the third tee, they regret it.

My advice would be to experience the right part of it, so give yourself a chance to hit it into the green, rather than tackle the 490-yard par 4 and end up in the rough. Move up the tees and put yourself in the best position to hit the second shot into the green because that’s a like for like with the pro’s.

Finally, who’s your pick for this week?

Obviously, my heart is saying Tiger Woods, but I think Dustin Johnson will be the guy to beat He drives it so well and his putting has been his key strength this season which is unusual, sitting 5th in that statistic on the PGA Tour. It’s amazing to think he’s only won one Major despite his 20 wins on the Tour, so he’s certainly overdue.

We understand that everything feels a little unpredictable at the moment, so our Flexibility Guarantee means that when you book a trip with us between 15th March and 31st July 2020, if you need to move your trip we won't charge you a fee to change the dates. We can also provide you with a travel credit towards your next booking instead if you prefer.