Whether you’re an avid golfer eager to hit the fairways or someone who enjoys indulging in luxurious spas, it’s not often that your other half shares your love for either…and that’s okay. It doesn’t mean you can’t go, it doesn’t even mean you have to head to separate venues… We’ve compiled a list of the Top 10 Luxury UK Golf and Spa Breaks below.

We often wonder why more couples don’t combine the two; while one takes on a monster par-5 with their mates, the other heads to the treatment room for a relaxing massage; it really is that simple.

As five-star resorts go in the UK, there aren’t many which can rival Trump Turnberry for its collective excellence, both on and off the course. While many golfers flock to the southwestern Scottish coast to tackle the four time Open Championship host, taking on either the flagship Ailsa course or the recently refurbished King Robert the Bruce course, its pedigree as a luxury spa destination cannot be questioned and is no doubt a huge factor in its popularity. With one of Europe’s finest spas, which features over twelve treatment rooms, a 20-metre infinity pool and of course a wide range of sporting facilities, you’ll be spoilt for choice when exploring the 800-acre victorian estate. Regardless of whether you’ve spent a day playing towards the iconic Turnberry Lighthouse or overlooking the Isle of Arran from the comfort of a steam room, your golf & spa experience doesn’t end there, with award winning restaurants and opulent bars and lounges. 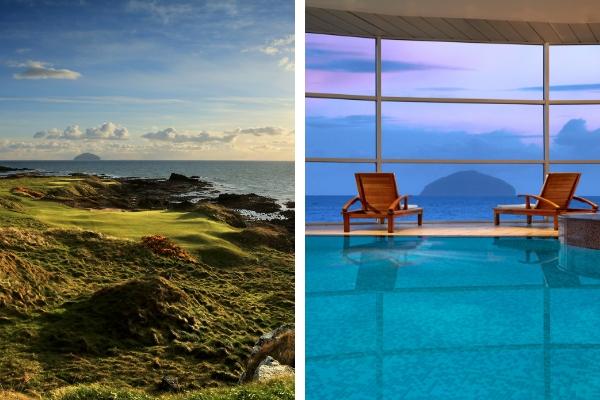 After hosting the 2010 Ryder Cup, Celtic Manor has been one of the UK’s most popular golf resorts, and while the renowned Twenty Ten Course is world-class, it’s also home to two other Championship courses; The Roman Road and The Montgomerie. Aside from these three golfing gems, the five star resort is a regular winner at the Spa Traveller Awards and rightly so; The Forum Spa picked up several honours in 2017 including Best Day Spa and Best UK Spa for Groups. After a day on the course or in the jacuzzi, whet your appetite at no fewer than six of the best resort restaurants you’re likely to experience; the Terry M restaurant, Rafters and The Lodge are all examples of the resort’s versatility. 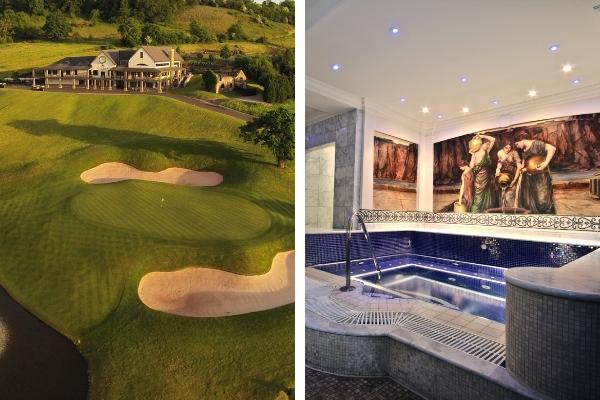 Set on an impressively restored 18th century estate on the banks of the River Tees, in the charming village of Hurworth, Rockliffe Hall is one of the finest five star resorts in the North East of England. Rockliffe presents a long and testing golfing experience with one of the longest tracks in Europe (7879 yards), however with five different tee positions this course can accommodate for players of all skill levels. To complement the highly rated golf course, Rockliffe Hall also boast one of the largest spas in the UK; luxury facilities including several therapy rooms and even a unique spa garden makes it the perfect place to escape and relax. Dining at Rockliffe is equally as enticing, with its very own Michelin-star Chef Kenny Atkinson’s ‘The Orangery’ which has a menu that varies daily as well as a choice of tasting menus. Kenny also brought his Michelin-star style to ‘The Brasserie by Atkinson’ which holds a strong focus on local produce. 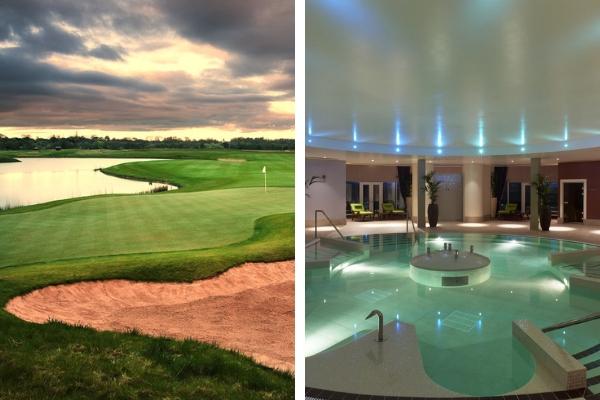 Often dubbed as the Augusta of Ireland, there aren’t many courses that can match Druids Glen for raw beauty; stunning flora and fauna help the comparison to The Masters host, but with style, comes substance. Known as one of the best parkland layouts in the UK, Druids Glen is a delight to play from the first tee and has a collection of mesmerising par-3s, including the signature 12th. The Boutique spa is in keeping with the quality of the golf, offering guests distinguished areas to unwind with a sauna, steam room and health room. With you both having enjoyed a day of luxury, spend the evening enjoying the award-winning Hugo’s Restaurant or perhaps a drink in the Garden Rooms with a beautiful outlook on the course. 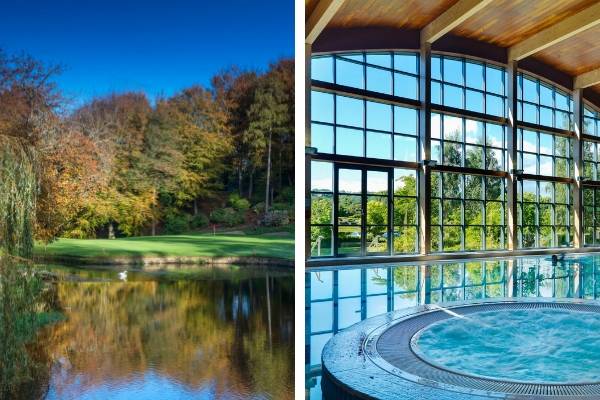 The Grove boasts an impressive luxury hotel, spa and golf resort set on 300 acres of land located in the Hertfordshire countryside. The esteemed course is no stranger to some of golf’s biggest names, including Tiger Woods after hosting the WGC American Express Championship in 2006 and then the British Masters 10 years later. With no members, this fantastic course is kept in exceptional condition all year round and one of the most welcoming golfing venues in the UK. Non golfers can spend the day in the opulent Sepuoia Spa where top range treatments are provided with excellent facilities including a steam room and spa room. For dining, The Grove boasts an impressive 70 chefs across three different dining options with hand picked fruit and veg from The Grove’s very own Walled Garden used throughout. 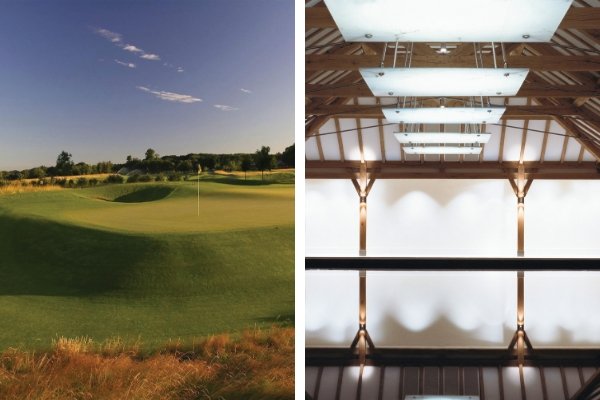 The world renowned Gleneagles Hotel earned its stripes through sheer excellence; from the accommodation and facilities to the acclaimed golf courses on offer, it really is one of the best in the UK for a golf and spa break. The PGA Centenary Course, designed by Jack Nicklaus, is the main attraction having hosted the 2014 Ryder Cup and in place to welcome the Solheim Cup teams in 2019, however the King’s and Queen’s courses all rightly belong amongst Scotland’s best championship courses. Now when I say that the Gleneagles Hotel is probably the best hotel you’re likely to stay at in the UK, regardless of golf, I’m not exaggerating. The Spa at Gleneagles is simply exceptional; bespoke treatments from experts are available while the state-of-the-art facilities are those of the very best five star resort. Remembering that the resort provides Scotland’s only two Michelin stars in Andrew Fairlie, it is the perfect golf and spa destination. 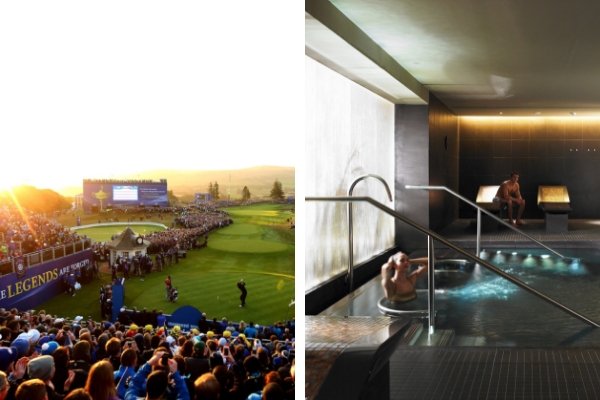 A journey to the picturesque village of Straffan, located in the heart of the Irish countryside is well worth the trip if you are planning on staying at The K Club’s five star resort. Golfers are offered the choice of two Arnold Palmer designed championship courses, one of which was the host of the 2006 Ryder Cup. The mature gardens surrounding the course and the River Liffey running through the grounds provides an extremely scenic round of golf and the all water 16th with its island fairway and green, moon-shaped 17th and dog-leg 18th all contribute to some of the most fantastic closing holes a golfer can experience. The K Spa allows guests to relax and rejuvenate before indulging in such dining as the River Room Restaurant or the Legends Restaurant in the Palmer Clubhouse. This resort is one of the ultimate golf and spa experiences in Ireland. 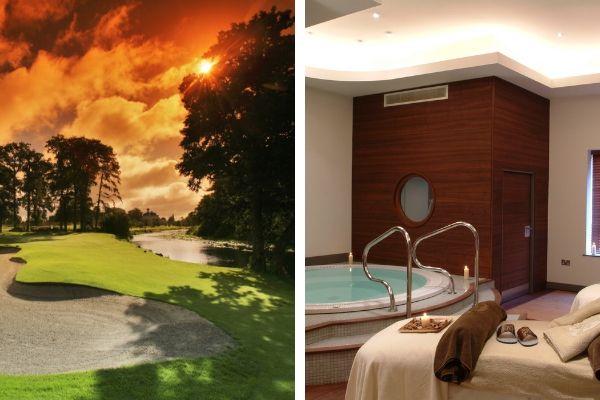 Luton Hoo has a fantastic reputation among golf and spa resorts in the UK, providing guests not only with a championship golf course but also state-of-the-art leisure facilities. The stunning layout is challenging for golfers of all abilities, forcing them to navigate over 7,000 yards with water hazards on no less than six holes. Aside from the golf is luxurious five star accommodation, set in an authentic mansion house and surrounded by immaculate gardens and countryside. The spa facilities are a highlight of the resort, offering an abundance of treatment rooms, pools and studios which are sure to keep you refreshed and relaxed throughout the stay. 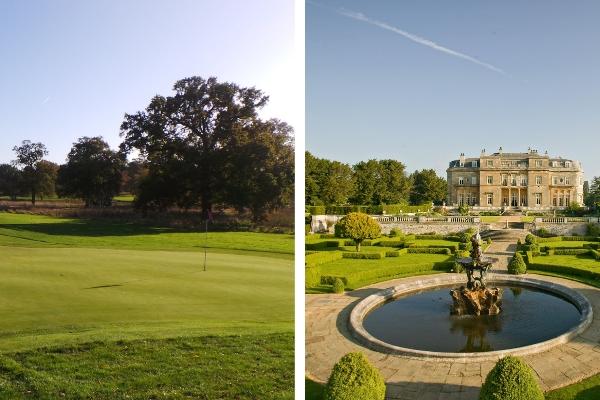 Located near the renowned spa town of Harrogate, Rudding Park Hotel & Golf Club is definitely one of the best golf and spa breaks in the UK. The championship Hawtree Course demonstrates features of a quintessential parkland course throughout all 18 holes; shoot carefully as you navigate through the tree-lined fairways and deal with the impressive natural hazards. Its traditional four star hotel is set in stunning surroundings and the modern finishes make it the perfect spot for golfers and spa goers alike. The Starlight Spa is extremely unique in offering an unforgettable rooftop experience, allowing you to indulge in complete luxury; in 2017 it won Best New Spa in UK at the Good Spa Guide Awards. 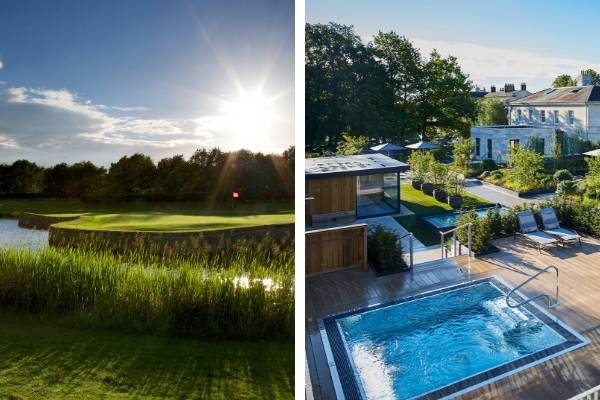 Bowood Park Hotel is perfect for anyone looking for a golf and spa break in the South West. The parkland course measures at just over 7,000 yards and designer Dave Thomas has embraced the natural landscape, creating some tricky hazards to deal with, even for low handicappers. Aside from the golf, its facilities are second to none with quality hospitality, award winning restaurants and one of the most enviable spas in the UK; the secluded area is perfect for guests to unwind and overlook the course and beyond, basking in the bespoke treatments and amenities. 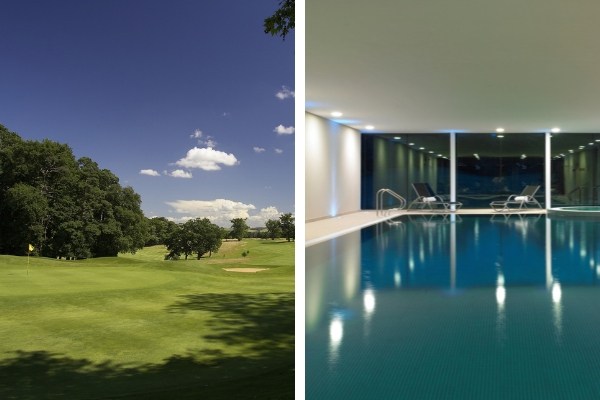 For more information on Golf & Spa breaks and getaways for both golfers & non-golfers please call free on 0800 043 6644.